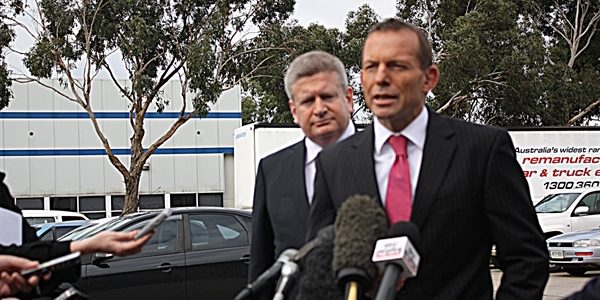 It’s good to be here at Nadrasca Disability Service Organisation. I want to thank Gus Koedyk and Mick Poole and their team and all the staff here for making Mitch Fifield and Helen Kroger and I so welcome. This is an excellent service. It’s about giving people the opportunity to make an economic contribution as well as a social and cultural contribution to our society. It’s very important that services like this continue and are given every opportunity to expand. This is where the National Disability Insurance Scheme comes in. This is an important social and economic advance for our country. It’s an idea whose time has come. The great thing about a National Disability Insurance Scheme is that it ought to give people with disabilities and their carers more opportunity to be productive and more opportunity to participate in our economy. That’s why it’s not just a cost. Over time, it is an investment in a better society and in a stronger economy.

One of the very important ways of ensuring that the NDIS happens in a timely and responsible fashion is to have the bipartisan parliamentary committee that I’ve called for to ensure that the NDIS continues to go into operation over the three elections that the Productivity Commission’s timetable envisages. I’m very disappointed that so far, the Prime Minister hasn’t responded positively to this proposal of mine. I do think it’s important that the NDIS go forward as a great national project: as something that the Australian people can be proud of; as something that the whole parliament can think of as an achievement and that’s why this joint parliamentary committee to oversee its development and implementation is so important. I’m going to ask Mitch as the Shadow Minister for Disabilities to say a few words, then there’s a carbon tax issue that I’ll briefly comment on and then I’ll take some questions.

Thanks, Tony. Well, I want to thank Gus Koedyk and the team at Nadrasca for having us here today. Nadrasca is a terrific organisation that provides opportunities for people with disability to have work. Work is important to ones sense of dignity and worth. The National Disability Insurance Scheme will certainly provide more of an opportunity for people to have the sorts of opportunity that Nadrasca provides and I should also mention that Nadrasca does a terrific job in printing, so for your printing needs, please do consider Nadrasca.

What would an opposition government do differently in rolling out the NDIS?

Well, we think that it’s very important that this be a joint effort of both sides of the Parliament. The
Productivity Commission envisages that the next two years be spent getting the detail of the scheme right; that the year after that be spent on a series of regional rollouts and the four years after that is spent working up to a full national scheme that will provide very much better and greater support services to the 400,000 or so Australians with significant disabilities. So, it’s a very complex scheme. It’s going to take seven years to become fully operational under the Productivity Commission’s timetable. It’s important to get this right and that’s why a bipartisan committee of the Parliament jointly chaired by both sides’ disabilities frontbenchers is the way to go. If we are going to maintain the momentum for this very important social and economic reform across three elections, if we are going to ensure that people aren’t distracted by the ordinary business of politics, we need a mechanism like this to make it happen in the most timely and responsible way, and that’s why I’m so disappointed that the Prime Minister  thus far at least  has not positively responded to what is, I think, a very constructive proposal from the opposition.

So, you are committing the Coalition to that seven year rollout proposal?

That would require funding, so it would be more than an aspirational goal, then?

Look, the Productivity Commission estimates that the full rollout will cost about $6.5 billion a year over and above existing disability spending. Now, that’s a lot of money. Make no mistake  that is a very large amount of money. But we’re not going to need to spend the money of that order until 2018-19 and if you look at the government’s own financial projections, they have the budget in very strong surplus at about 1.5 percent of GDP by that time. So, I’m confident that with good economic management and no big external shocks, it should be more than possible to fund the NDIS in accordance with the Productivity Commission’s timetable by 2018-19.