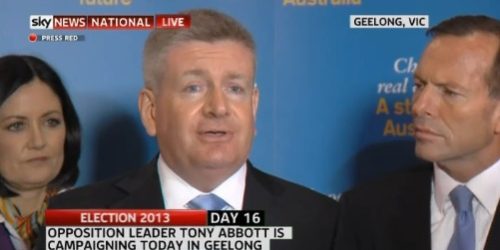 THE HON. TONY ABBOTT MHR, LEADER OF THE OPPOSITION

THE COALITION’S POLICY FOR AUSTRALIANS WITH DISABILITY AND CARERS

The Coalition’s Policy for Disability and Carers will deliver the National Disability Insurance Scheme (NDIS).

Too many Australians, people with disability and carers alike, have been left behind. They deserve so much better.

That is why our support for the NDIS is unequivocal.

We support and will keep the NDIS headquarters in Geelong.

The Coalition will also expand the responsibilities of the Joint Parliamentary Committee on the NDIS to ensure that this project remains on track through three parliaments.

The rebranding of the NDIS as DisabilityCare Australia has not been well received by many with disability. The Coalition will revert to the use of ‘NDIS’.

We will also improve the level of support for people with disability by reducing the complexity and red tape that accompanies disability support. Despite good intentions, the current system can be a maze that is too difficult for many to manage.

Every day, tens of thousands of Australians with a disability require the assistance of a carer. We will protect Australia’s carers and maintain the Carers Payment, Carers Allowance and Carers Supplement.

We will also bring carers as well as people with disability closer to the decision making that impacts their lives by establishing an industry advisory council for the disability and carer sector.

Young carers in particular carry a difficult responsibility looking after family members. To assist young carers, the Coalition will establish a Young Carer Bursary Programme to assist hundreds of young carers and help with the cost of study while caring for a family member. 2

The best guarantee for the NDIS in the long term as well as support for carers is proper management of the Budget and the economy by a government that can live within its means.

Supporting Australians with disability and carers is part of the Coalition’s Real Solutions Plan to build a stronger Australia and a better future  for all Australians.