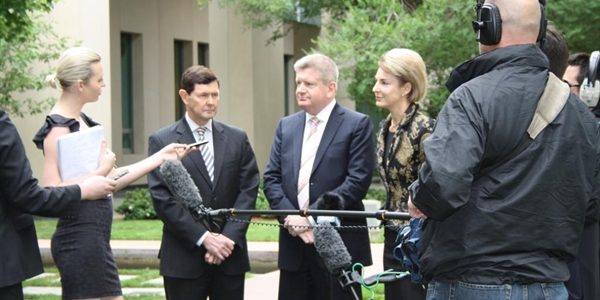 SENATOR MITCH FIFIELD
Shadow Minister for Disabilities, Carers and the Voluntary Sector
Manager of Opposition Business in the Senate

Ladies and Gentlemen, thanks for coming out this morning. This Parliament shouldn’t rise for the year until the Government introduces a mini-budget. They should do that to deal with the unravelling situation with the carbon tax. We had President Obama here last week making it absolutely clear that the Americans are not going to introduce a similar measure in the United States. We know the Canadians are not going to do so, in fact we know that there’s no major economy  if one looks at India, China and the other major polluters or emitters around the world  where that’s going to happen. So that means that the assumptions upon which the Government has put forward its carbon tax are flawed. This is unravelling, it’s going to have an impact in terms of revenue and it’s certainly going to have an impact in terms of the compensation so far as Australians are concerned.

There should be a mini-budget to deal with this, and as it’s a mini-budget, the Parliament should have the opportunity as it does each year to look at the budget. In particular, in this portfolio, there are two items that the Government has made announcements about, and created expectations in the community, that should be included in any economic statement. One is the National Disability Insurance Scheme, which Senator Fifield will say a bit more about in a moment, and the other is the announcement by the Government that it would fund the claim before Fair Work Australia for low paid workers in the community sector, and Senator Cash will say a bit more about that.

Thanks Kevin. Firstly, as Manager of Opposition Business in the Senate, I’m very disappointed that the Senate – which was scheduled to sit on Monday, Tuesday and Wednesday next week  now will not. The MYEFO is going to be in effect a mini-budget. It should be treated as such. The Senate should sit as scheduled and the House of Representatives should also be recalled so that it can examine the mini-budget.

In relation to the announcement by the Government that it will fund its share of any decision by Fair Work Australia for the community sector employees in relation to the wage increase, the Coalition has made it quite clear that we support that decision. However the announcement by the Government raises more questions than it does provide answers. To those in the community sector the most important question is; how does the Government intend to fund any wage increase, in particular given the fact that we have not yet seen a decision from the full bench of Fair Work Australia?

The other issues that are raised are how do the states fund their part of any wage increase? The Government has not yet put on the table what the position of the states is. The Government has not yet said to the people of Australia that it has in fact spoken with the states. In fact, the information that we have is that a number of the states have made it very clear  they don’t have the funds to fund any wage increase. They will be looking to the federal government to provide them with any additional funding. And in relation to the not-for-profit sector, the Red Cross in Queensland is a very example of a not-for-profit that has had to hand over a wage increase to its employees, and it has made it very clear to the Queensland Government that it does not have the funds to pass on any wage increase. So as Senator Fifield and Mr Andrews has said, the Government should recall the House of Representatives next week and we should be hearing from them exactly how they intend to fund any wage increase that flows from the decision of Fair Work Australia.

Senator Fifield, if I could just move on to the disability question. With MYEFO, it’s expected that the Government will adhere to a fairly tight surplus. They’ve made it clear that they’re going back to surplus. This means there’s going to be very tight measures in funding areas. Do you support going into deficit to fund the National Disability Scheme? Are you calling on the Government to give up their surplus?

I’m calling on the Government to live within their means, but also to meet the expectations that they’ve raised. The Government have acknowledged, as has the Opposition, that support for people with disabilities just isn’t good enough. We want to see the budget back into surplus. The Government say they want to see the budget back into surplus as well. But I do note that the amount of money which we’re talking about here  ultimately $6.5 billion for the unmet need for people with disabilities  is roughly equivalent to what the current Government spends on their annual interest bill on their debt. So it’s really a matter of priorities.

In terms of priorities, what’s more important, a surplus or the National Disability Scheme.

You should prioritise to live within your means. Governments tax the Australian people plenty. The problem isn’t that they don’t tax enough. The problem is that the Government don’t have their priorities right. As the Productivity Commission said, if you were starting to design from scratch what it is that government does, one of the first things you would start with is decent support for people with disabilities. It should be core government business.

Do you support a tax increase at all to fund a disability scheme?

If this Government hadn’t wasted billions of dollars on pink batts schemes and cash for clunkers and all of these mad schemes that are now unravelled, there would have been the money there to pay for the National Disability Scheme. And that’s the real tragedy of what’s unfolding in Australia over the last few years. Money has been wasted  billions upon billions upon billions  and when there is a good cause which ought to be funded, namely the National Disability Scheme, they’re now making noises that they don’t have the money. They’ve put no new money on the table, the $10 million they put into the study of it is actually coming out of existing departmental funds. So far, an expectation has been created in the community – and this is an important point – this Government goes out and creates expectations about the National Disability Insurance Scheme, goes out and creates an expectation for all the workers in the community care sector in terms of increasing wages, and now the crunch point has come, where’s the money coming from? Minister Macklin has to ensure that in the mini-budget that comes down, that these matters are covered. Otherwise they’re left looking hypocritical about it.

Medicare is funded by the Medicare levy  that is probably the only comparable scheme to the National Disability Scheme. This Scheme has to be funded every year. Would you support, if you were in government, a similar levy?