Broadband was a mess until Coalition delivered earlier and cheaper solution

Broadband was a mess until Coalition delivered earlier and cheaper solution

Today the NBN turns 10. Despite the column inches and the endless debate about technology types, the NBN is near completion with 99 per cent of premises in design, under construction or able to order a service. Nationwide 75 per cent of homes and businesses can order a service with more than 92 per cent able to do so in regional Australia.

This scenario was unthinkable in 2013 when the Coalition came to office and inherited what was a failed project. Despite Labor having spent $6 billion over four years only 51,000 premises had been connected and contractors had downed tools in four states.

The problem was the plan sketched out on the back of a napkin on PM Rudd’s VIP flight took a theological approach rather than a technological approach to the rollout of the NBN. Labor created a new monopoly government company with no experience in building networks and proceeded to tell them what technology they had to use.

What could go wrong!

Incoming communications minister Malcolm Turnbull took a commonsense approach to look at what the rest of the world did.

The rest of the world, like Australia, had a fibre backbone to its network, but unlike Australia, used a range of technologies for the final connection. Why? Because it was cost effective and faster to do.

So NBN was given a new mandate to use the technology that made sense in a given area to see the NBN completed as soon as possible and at the lowest cost.

The result: NBN will be completed by 2020, six to eight years sooner and at $30bn less cost than Labor’ approach.

This lower cost matters because it means that the annual internet bills of Australians will be $500 a year less than would have been the case under Labor’s model.

Where Labor has been successful, however, is in extolling myths such as Kenya having better internet than Australia. Such comparisons ignore that only 2.4 per cent of Kenyans have any access at all to broadband.

And in terms of affordability, according to research by Alpha Beta (headed by Kevin Rudd’s former chief economist), NBN prices are the seventh most affordable in the world as a percentage of household income — equal to the US and better than Spain, China, Italy and Canada.

None of this is to say that the rollout has been perfect. It hasn’t. With a project seeking to do in 11 years what it took the PMG, Telecom and Telstra 70 years to do, there were always going to be issues.

But we have learnt and made improvements. Pricing has been changed so that the retailers have no excuse not to purchase from NBN enough capacity to serve their customers. And the ACCC has been given the funds to embed probes in homes and report on retailers’ speeds. Better service and greater transparency have been the result.

The unthinkable has happened. What was a failed Labor project, flawed in conception and design, has been salvaged under this government — and people are noticing.

In April last year, the Telecommunications Industry Ombudsman said in relation to customer experience over the NBN: “you can draw the conclusion that the majority of connections to the network go well and that the consumer gets a good experience …”

The NBN will be completed by 2020, within the time frame and budget outlined in 2014. And as with any telecommunications network, there will be ongoing upgrades and improvements. But because most Australians already have it, NBN has added $1.2bn to the economy and is expected to create up to 80,000 new businesses and 148,000 new digital jobs, boosting GDP by $10.4bn by 2021.

I congratulate NBN Co on reaching its 10-year milestone, as it speeds towards completion of the project next year.

Senator Mitch Fifield is the Minister for Communications and the Arts 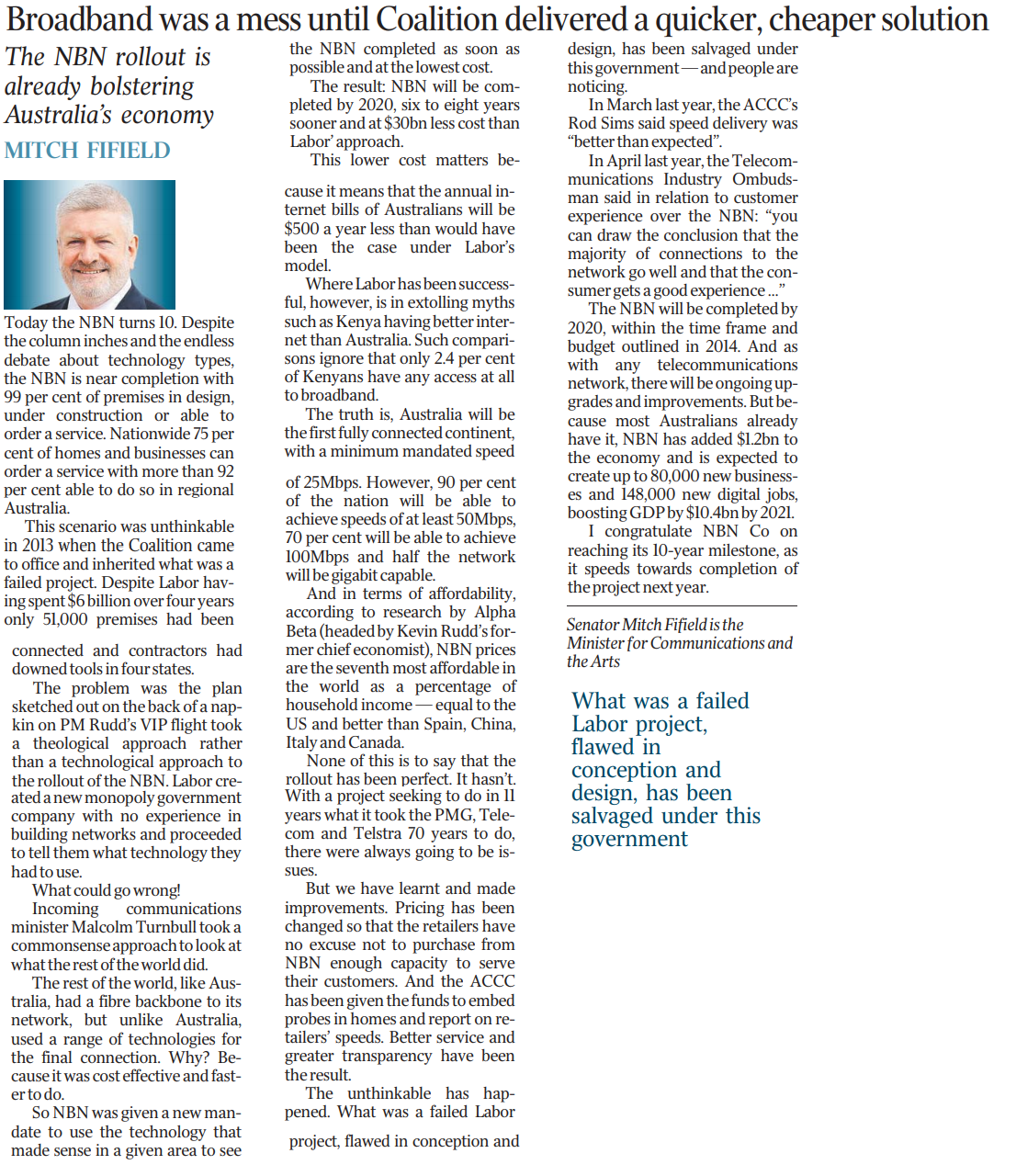