This article also appeared on page 32 of The Daily Telegraph, on 5 April 2019, titled “Social media giants must be more responsible”

This barbaric act was made even worse by the terrorist’s decision to broadcast the attack live on Facebook. Despite the live stream running for 17 minutes and a user reporting it to Facebook 29 minutes after the attack, Facebook did nothing to remove the video until after the 60-minute mark — and that too only when the New Zealand police asked the company to take it down.

For about 70 minutes, that video was available to users around the world to download, copy and post to other websites. As a result, there are now millions of copies of footage of this horrific crime, causing survivors and families of the victims more pain and anguish knowing the slaughter of their loved ones remains on hard drives across the world.

Children in Australia with access to a computer or phone were able to log on to social media and watch that mass slaughter of innocents. This is clearly unacceptable and intolerable for Australian families. This is why yesterday the Morrison government passed world-leading laws making it a criminal act for companies such as Facebook to not remove such horrific material as soon as possible.

In addition, the laws require social media companies and online platforms to notify Australian police when they discover abhorrent violent material that they think shows conduct that is occurring in Australia.

Since we announced our intention to pass these laws we have heard loud and frequent complaints from social media companies and their lobbyists. Indeed, we have heard far more from them about these laws than we did in the meeting designed to discuss the response to the incident in which 50 people were murdered.

Ultimately, the Morrison government doesn’t think it is unreasonable for Facebook and Twitter to stop showing murder, rape or torture on their apps and websites. We also don’t think it’s unreasonable that if they have reasonable grounds to believe their platforms have evidence of a murder or a rape occurring in Australia, that they tell our police about it. These laws were passed urgently because the Coalition didn’t think Australian parents would find it reasonable for us to allow such material to be lawfully available for weeks during the election period. They wanted action, so we listened and delivered.

There has been some concern voiced by traditional media outlets that the new laws could somehow infringe on their ability to report the news. This is not the case. We have been careful in drafting these laws to ensure protections for responsible news organisations presenting news in the public interest.

We are not aware of any example where an Australian media organisation has engaged in the sort of conduct that would contravene these laws. A free press is a fundamental pillar of a strong democracy, but so is the principle that the law should apply equally to all.

The government accepts that these issues require ongoing consideration, which is why we will institute a comprehensive Senate inquiry into this legislation and related issues following the upcoming election.

Australian parents know they can turn on the 6pm news and not risk their children seeing the violent massacre of 50 people. They don’t have that assurance of safety when it comes to Facebook. This is because traditional media outlets properly comply with a range of classification rules and laws. They would never show the live stream of a murder anyway, and this bill changes nothing about what they would show as news.

We have also included a strong defence for news outlets that do show material where it is in the public interest to do so. This means there is no practical change to what Australian media can include in their online news.

But what these laws do mean is that Facebook and other social media companies are now committing a criminal offence if they don’t quickly remove horrific videos. If they don’t, they could face fines of up to 10 per cent of their annual turnover or, in the most extreme cases, up to three years’ jail for executives found to be highly complicit in the offence.

So whether it be cyber-bullying of kids or the harassment of women through posting and sharing intimate images without consent, the Coalition government has ensured Australians can be protected and perpetrators can be punished.

Facebook and Twitter earn billions in revenue from their platforms. It isn’t too much to ask that they make every effort to ensure that Australian kids and families are not exposed to this type of awful content.

Christian Porter is the federal Attorney-General; Mitch Fifield is Minister for Communications and the Arts. 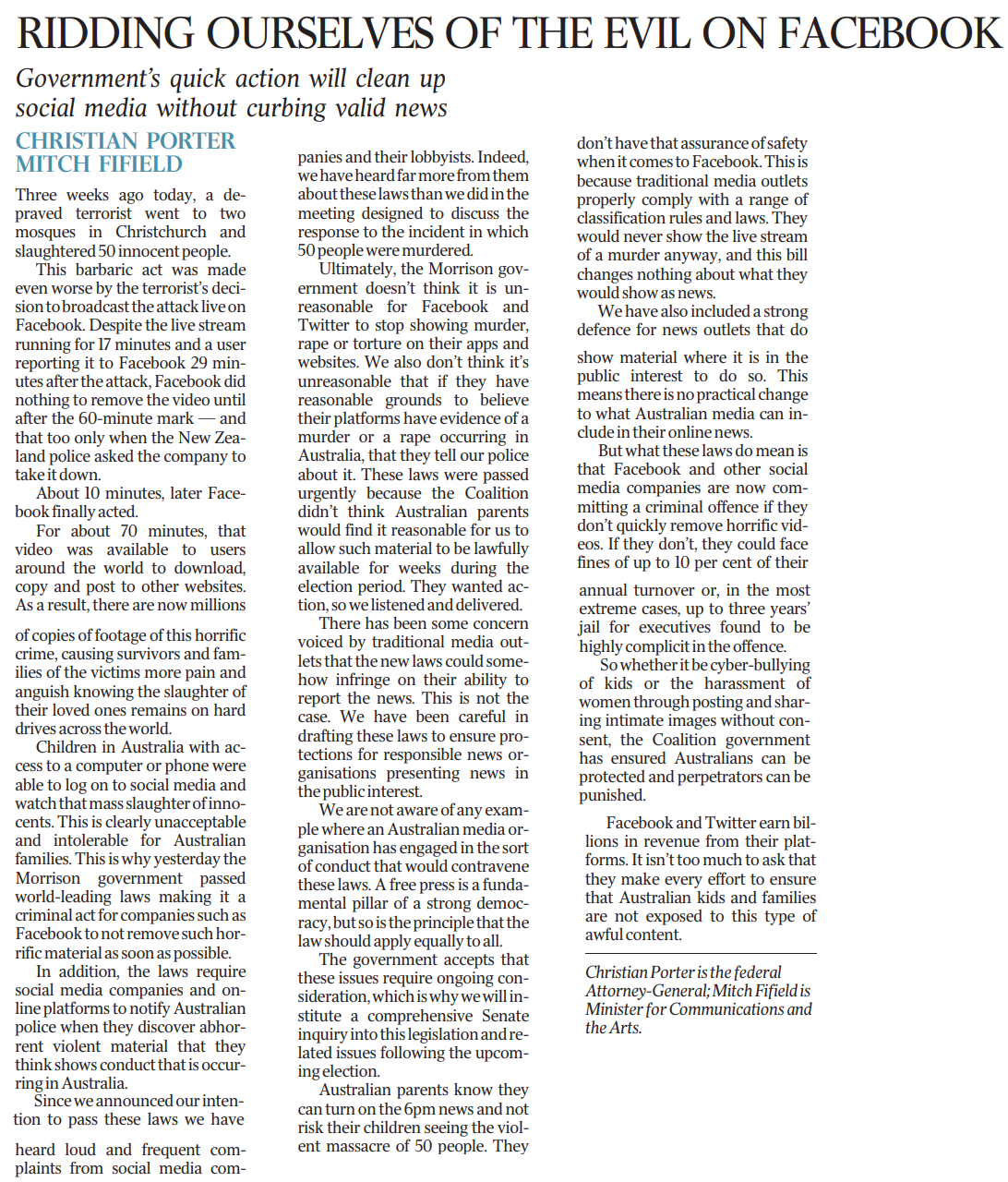