What is it about recent Labor leaders and Melbourne?

Paul Keating is reported to have once remarked on a flight on approach to Melbourne, “Better pop the bland pill.”

The rest of Australia fared little better in the Keating view when he commented, “If you’re not in Sydney, you’re just camping out.”

Even Bob Hawke’s true heart was revealed by his choice of post-political home. West Australian Kim Beazley was an adopted son of the NSW Right and Labor often toyed with having him as a Sydney-based leader.

Simon Crean, with a genuine affection for Melbourne, was the notable exception.

But with the election of Mark Latham, the Labor focus returns to the Sydney basin.

Already 3AWs Ross Stevenson and Neil Mitchell are complaining that Latham has a bias for Sydney radio. Where was Labor’s national conference held? Sydney, of course.

As with Keating, Latham has tried to compensate, first, by adopting Collingwood, and then going one step further – donning a Collingwood jumper.

A lack of judgment and a vote loser for sure, although Latham has never asked, as Keating supposedly did, how you scored a try in Aussie Rules.

Victoria would fare particularly badly under a Latham government. His Sydney focus is manifesting itself in a way that is more troubling than a simple lack of appreciation of the significance of Melbourne and the rest of Australia.

Latham has started to tailor policies that are to the advantage of Sydney only.

He has committed Labor to a policy to increase the first home owners grant for certain Sydney residents by $5000. Those who qualify would work in essential services and include teachers, police officers, childcare workers and nurses. Taxi drivers are not included.

Apart from discriminating against most of Australia, why should only certain occupations be eligible? Why should people in service industries be excluded? What about ambulance and fire crews or utility workers in the gas, electricity and water sectors?

Such a system would be arbitrary and administratively complex. Citizens of every other capital city and region would subsidise a program for which they were ineligible.

As with other Labor schemes, such as the $700 million coast guard, this is totally unfunded.

Latham has an attraction to discriminatory and unworkable policies. The GST exclusion zones are another instance.

He proposed a scheme whereby shopping centres in economically depressed areas would not have to charge GST.

Latham would also be to the industrial detriment of Victoria, the spiritual home of militant unionism in Australia.

He has shown no inclination to clamp down on the more lawless elements of the Victorian labor movement.

He was silent on the CFMEU’s blackmail on the MCG redevelopment where Victoria had to refuse $90 million of Commonwealth money.

If Latham does not have the confidence to tackle the militant unions when Labor controls every state parliament, he is not going to discover it as prime minister.

Latham would not have had the courage to institute a royal commission into the building industry: Trades Hall would have exercised its veto.

The building unions will remain in check in the lead-up to a federal campaign but would reassert themselves in Victoria under federal Labor.

Latham’s view of the nation- al interest in industrial mat- ters does not extend beyond the Murray.

He can prove he recognises the importance of Victoria and Melbourne by abandoning his Sydney first home owners grant and by cracking down on union militancy in Victoria.

Only when he does this will he have any credibility when he sets foot in Victoria.

If Latham was serious about being a leader for all Australia he would have used the Labor national conference as an opportunity to abandon policies that discriminate on the basis of geography and would have declared the era of Victorian union militancy at an end.

Pulling on a Collingwood jumper cannot mask his narrow view that Australia starts at Bondi and finishes at the foothills of the Blue Mountains.

MITCH FIFIELD is a former senior adviser to the Federal Treasurer and will assume Richard Alston’s casual Senate vacancy in March. 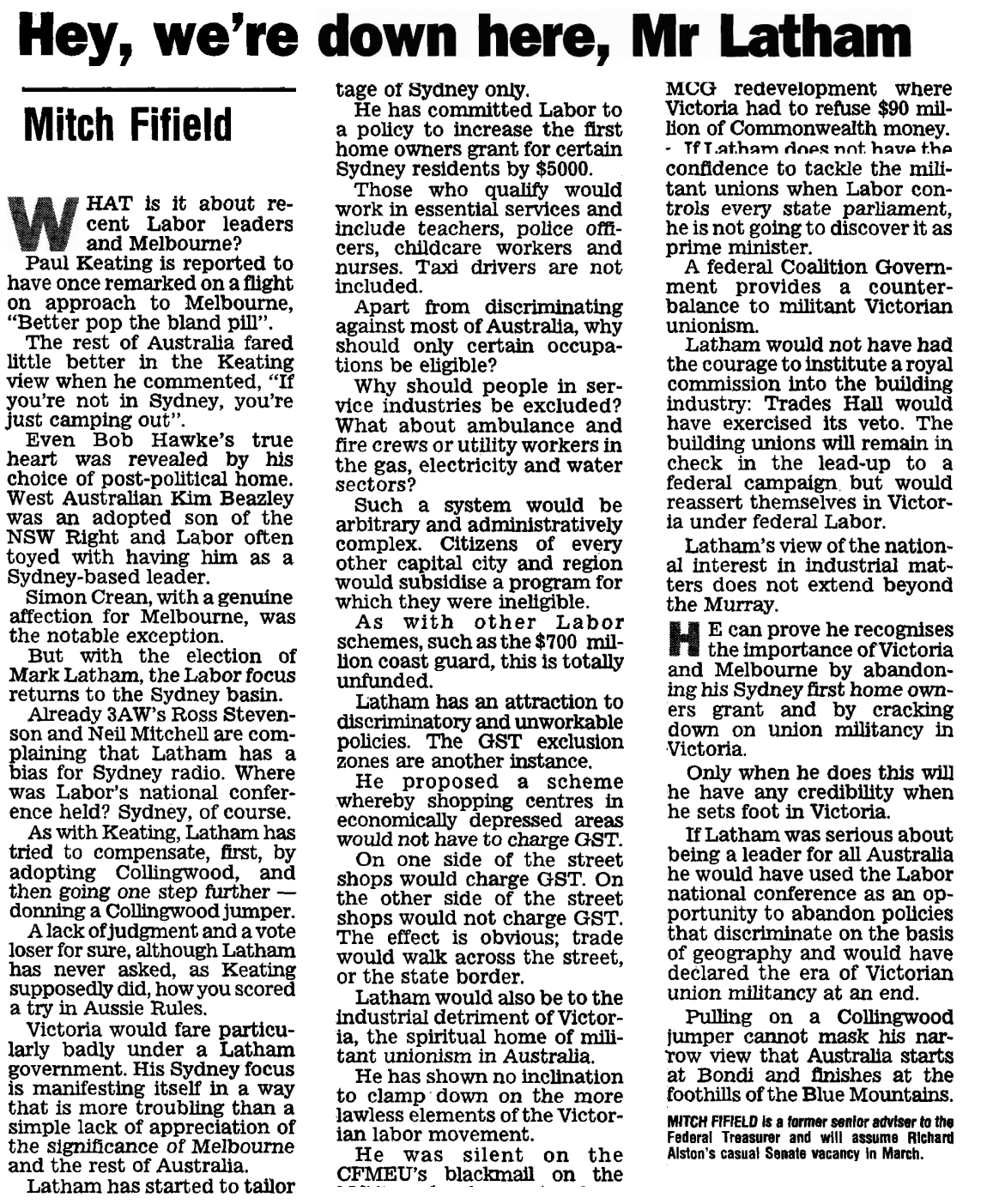