Rein in the visible hand

Rein in the visible hand

Canberra should cut tax rates and thresholds to allow taxpayers to keep more of their money, urges Mitch Fifield.

Oh no, not again. A debate about tax and welfare reform. The eyes of tax policy junkies light up, others gaze at the ceiling. Everyone wants to cut tax, but who’s prepared to pay for it? There’s nothing new about that battle.

But there is new opportunity. From July, there will be a situation Australia hasn’t faced for more than two decades – a government majority in the Senate. This is where the backbench tax forum makes its stage entry: to provide a backdrop against which views about the future direction of taxation and welfare can be discussed afresh.

Tax revenue should be kept at low levels because the future is best served by leaving tax revenue in the hands of its present owners, the taxpayers. And this also requires further improving the tax and welfare systems to build workforce participation and productivity.

This is the policy formula the Government has consistently pursued. There have been three rounds of personal tax cuts, with a fourth from July 1 this year. The capital gains tax rate was halved. The company tax rate was reduced. Many state taxes were abolished as a result of the introduction of the GST. The withdrawal rates on income support payments have been reduced.

But we can do better, and with tax cuts we should always be looking to the next step. Bracket creep is just one reason for that. Increased employment and booming company profits also increase revenue.

The proposal to index personal tax thresholds as a means of constraining government spending may be a policy mirage. If tax thresholds were indexed from 1996, and the Australian Government had done nothing else to cut income tax, taxpayers would be handing over more to the Government than they do now. Indexation can actually take the heat off governments to keep cutting taxes. Much better to keep everyone’s eyes on both tax collections and government spending.

Government net debt levels are so low that policy officials are sitting around wondering how to handle a possible net asset situation. Australia is breaking ground where other western nations aren’t – not Britain, the US or Canada. It’s seminal stuff.

While there is pressure for governments to revisit capital gains and business taxes, the worst disincentives are found in the personal tax system.

The threshold for the top tax rate is one of the lowest proportions of average wages among developed nations. Australia’s tax system is one of the most progressive, too, and the impact of this is felt in the high effective marginal rates of taxation across a range of middle incomes.

Providing meaningful tax cuts will require careful constraint of government spending and pursuing savings measures. If we only look to projected surpluses over the forward estimates there isn’t much room to move; the underlying cash surplus reported in the Government’s mid-year budget review totalled $24 billion from 2004-05 to 2007-08. And since then, the Government has rightly committed a significant amount to the rebuilding effort following the Indian Ocean tsunami.

Meaningful tax cuts require some hefty reductions in revenue. To lower the top rate by 1 percentage point – from 47 per cent to 46 per cent  would cost about $600 million a year. That’s quite a bite into tax revenue for a cut that would deliver just $100 to the pocket of a taxpayer with taxable income of $80,000.

Reducing the 30 per cent rate to 29 per cent could cost about $2 billion a year. Even a taxpayer at the top of the rate range would only save $364 a year. Less than $7 a week. And raising the tax-free threshold from $6000 to $7000 would cost in the order of $2 billion a year. That sounds like a lot, considering the individual taxpayer would pocket about $3 a week.

Grand plans to cut taxes by slashing the top marginal rate – ramping up the tax-free threshold and then adding changes to welfare and perhaps business taxes – do not come cheap. Any realistic plans have to be moderate, require spending restraint, and have to involve savings measures. Projected surpluses are not a never-ending magic pudding.

It’s not about large-scale slashing of programs. This is not 1996 when the Coalition government inherited Kim Beazley’s budget black hole. There should be plenty of room to cut tax, maintain necessary services and to help our neighbours to the north.

With spending kept in check, the government party room and the community is faced with a choice. The Australian Government can find new programs to fund, or extend, family payments, or leave more money in taxpayers’ pockets by cutting tax rates and thresholds.

The scope of government activity is already wide enough, and the size of family payments now works against arguing for additions. The latest round of family payment increases was the largest package of assistance to families ever introduced in this country. The base rate of family assistance has increased from under $600 a child in January 1996 to almost $1700 a child in July 2004, a real increase of more than 100 per cent.

A good start with regard to tax cuts would be to reduce the top tax rate, currently47 per cent. I do not necessarily argue for the rate to fall to 30 per cent, in line with the company tax rate. To improve work incentives, any fall is a step in the right direction.

And in any case, the company tax rate is a flat rate, so the top marginal rate could stand to be a little higher without creating significant incentives for tax avoidance.

For my part, I will be arguing that the Australian Government should be cutting tax rates and thresholds to allow taxpayers to keep more of their money. It belongs to them, so let’s give it back.

Mitch Fifield, a federal Liberal senator for Victoria, is co-chairman of the backbench tax/welfare reform group. 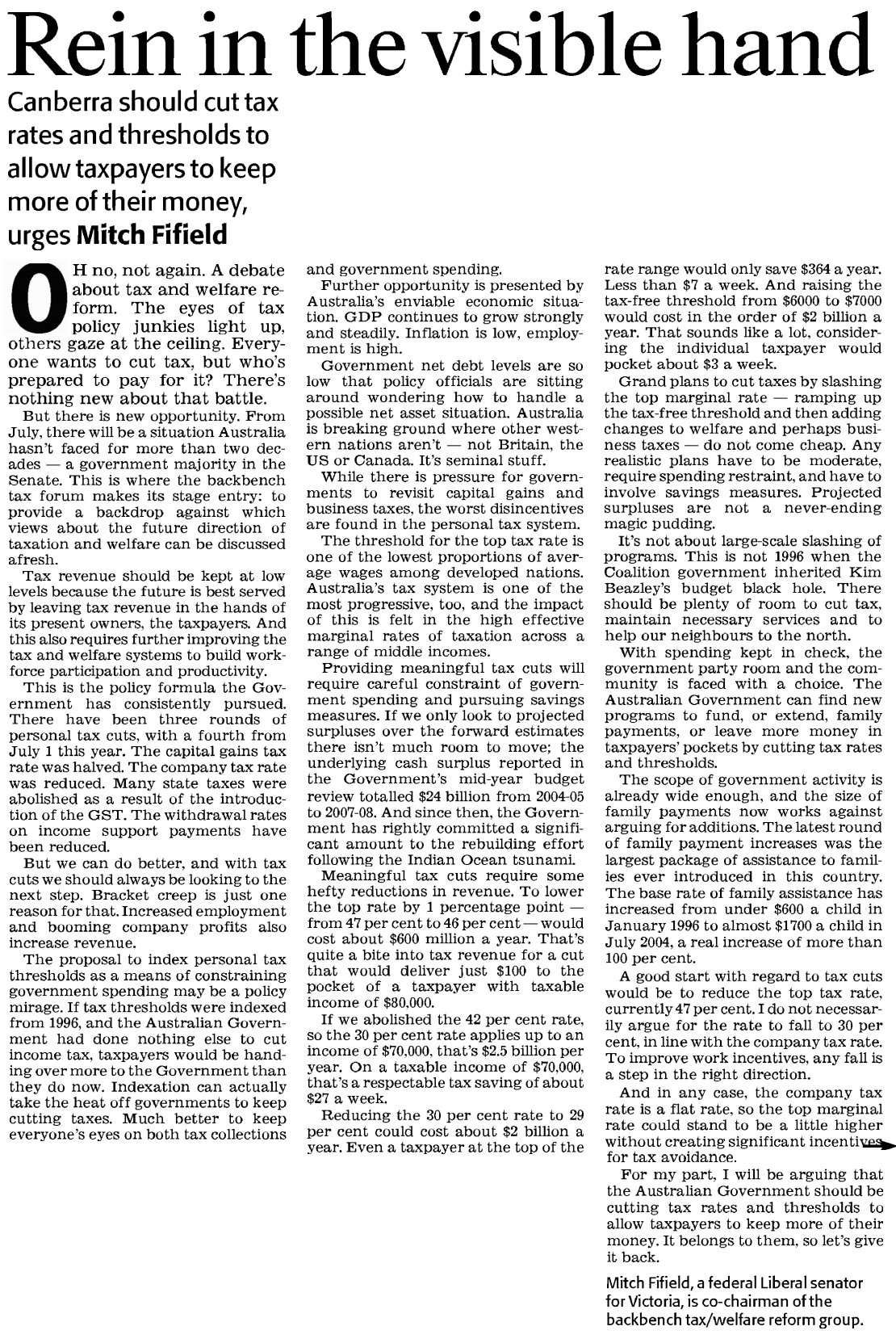