Costello can become a PM to treasure

Costello can become a PM to treasure

Above on this page are the usual rantings of John Stone, a failed National Party senator who opposed the floating of the dollar and helped break up the coalition as part of the bizarre Joh for PM push.

What Stone should be acknowledging is that the coalition has benefited from one of the strongest and most enduring political partnerships of modem times. The longevity of the Howard-Costello team, at 12½ years, is proof alone.

The partnership has been the backbone of the government. Australia would not have enjoyed 10 years of good government, 10 years of reform or 10 years of economic prosperity without the dedication and application of both men.

No leader can serve this long and this well without the unwavering support of a loyal and capable deputy. In Peter Costello, John Howard has had such a man. As the Prime Minister has often said, Costello is the chief economic architect. No one deserves more credit for the strength of Australia’s economic fundamentals than Costello.

The Prime Minister has often said the Treasurer is the obvious successor. There would be few in the party room who would dispute that.

The fact is that Costello has led an Australian economy which has been a huge success story. That success has been recognised internationally as the result of good economic management.

Only two weeks ago the managing director of the International Monetary Fund said: “Other countries have much to learn from Australia, which is reaping the benefits of broad ranging structural reforms that have generated high productivity and falling unemployment.”

The Organisation for Economic Co-operation and Development said that, through its successful implementation of economic reforms Australia had become “a model for other OECD countries”.

Under Peter Costello, the strengthened Australian economy now boasts a jobless rate at 4.9 per cent, interest rates at historically low levels and the elimination of public debt.

These results have been achieved in the face of the Asian financial crisis, the US recession and the worst drought in 100 years  all events which would previously have sent our economy into a tailspin.

Australia’s tax to GDP level has declined over the last 10 years and we are now the eighth lowest taxing country in the OECD.

The reason that tax levels were able to be brought down is because spending has been disciplined, and spending/GDP has declined to a point where there is now lower government spending in Australia than the United States.

These achievements have not been solely due to the Treasurer.

They are the result of a united team and a Prime Minister dedicated to the same task.

But credit should be given where it’s due.

Having passed the 10-year mark in office, we have to show evidence to the public – as a party and as a government – of our ongoing capacity to perform well if we are to seek their support for a fifth term. The party needs to take steps to set itself up for long-term government. The 108 men and women of the Federal Parliamentary Liberal Party of Australia have a collective responsibility to ensure this happens. We owe it to the Australian people to make sure the party is a viable long-term option at the next and subsequent elections. The key to this is to effect a smooth leadership transition.

What the Australian Labor Party most fears is a smooth transition, because it demonstrates that the Liberals can regenerate successfully. What the ALP craves is a Liberal transition gone awry.

Over recent days the Treasurer has done only what you would expect. He has told the truth. The Treasurer has acted in an open and straightforward manner and with integrity. He is a great Treasurer. He will be an outstanding prime minister.

Mitch Fifield is a Liberal senator for Victoria. 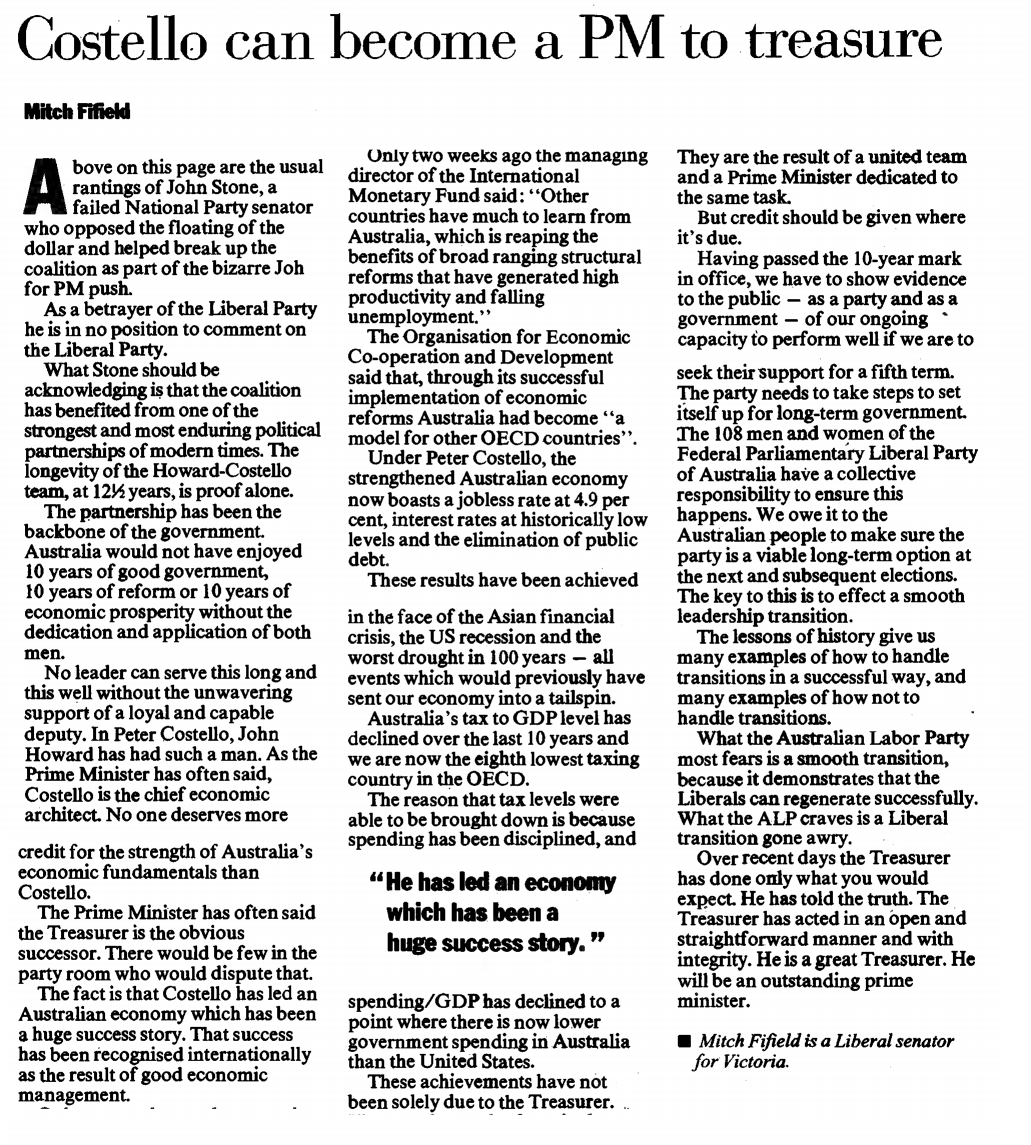