Terror is no joke

Terror is no joke

It is easy to become complacent about the threats of Islamic terrorists and their sponsor states.

The terrorists and their threats can seem remote and unreal.

Take the letter from Iran’s embassy in Canberra to MPs and Senators to keep them informed on the situation in the Middle East.

The Supreme Leader decried the “bloodthirsty Zionists and their bigheaded and arrogant American supporters”.

The Ayatollah then called upon “the Muslim youth in all Islamic nations” to “stand against the savage wolf of Zionism and the aggressions of the great Satan”.

Sadly, the supreme leader’s speech was not a script from the movie, Team America – World Police and its puppet characters from Durkadurkastan, nor a lame attempt at satire.

It was a real and unambiguous threat against the United States and Israel.

The speech was received quietly in the democratic world. Americans did not attack the Iranian embassy in Washington. Israelis did not firebomb Shiite mosques in Jerusalem.

Contrast this to the reaction in the Islamic world to the Pope’s theological and historical observations about faith, violence and the nature of God.

The response was violent and the violence was portrayed, by some, as the fault of the Pope.

There is a trend, when liberal democracies or Western institutions are attacked by terrorists, for their apologists to blame the victim. The real culprits are portrayed as offended, oppressed, outgunned or misunderstood.

The victim becomes the guilty party.

This trend was in evidence when British authorities uncovered a terrorist plot.

British Muslim leaders responded by publishing an open letter to Prime Minister Blair stating British Muslims would be less likely to plan attacks if the UK disengaged from Iraq.

The blame-the-victim approach was again on display during the latest unprovoked assault on Israel. There was little mention that Hezbollah and Hamas rocket attacks and kidnappings were precursors to Israel’s military response.

In the current blame game, those who speak freely or seek to defend themselves are deemed guilty because they should take greater account of the likely reaction.

In Victoria the blame game has been enshrined by Labor through the Racial and Religious Tolerance Act (2001).

Under this legislation, two Christian pastors have been found guilty by the Victorian Civil and Administrative Tribunal of making fun of Muslim beliefs and practices. Their crime was to examine and quote the Koran in a way that evoked laughter.

The threat of violence posed by some adherents of Islam is real. We need to know the conviction that drives this violence.

We should not apologise for seeking to understand the threat and nor should the Pope.

If Islam is not, at heart, a violent belief system then there should be no harm in asking these questions.

If it is, the sooner we confront the reality the better. Appeasement betrays a greater desire for false harmony than for truth.

MITCH FIFIELD is a Liberal senator for Victoria 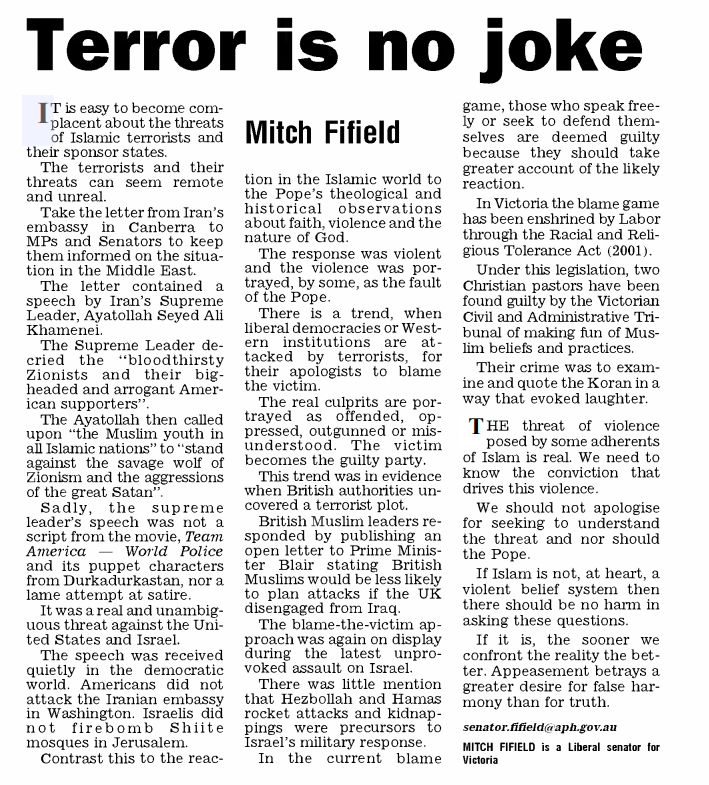