Include this: stop faffing about and do something

Include this: stop faffing about and do something

THIS newspaper has exposed something quite disturbing. The government does not have a clue what social inclusion means. They are spending money on something and they don’t even know what it is.
The Prime Minister’s front-bench reshuffle late last year saw Mental Health and Ageing Minister Mark Butler add “Social Inclusion” to his responsibilities.

This weighty new role was enough to bump him up and into cabinet.

Yet Butler stumbled at his first press conference when asked what social inclusion actually was.

All he could come up with was an astonishing non-answer: it meant, he said, “different things to different people”.

He then penned an opinion piece for this paper to try and explain it. It would have been better had he not.

Butler wrote that social inclusion is a “relatively new and perhaps unfamiliar term”. A strange thing for a Labor minister to say, since the ALP has had a Minister for Social Inclusion for more than four years.

Butler is Labor’s third Social Inclusion Minister. Julia Gillard was the first, followed by Tanya Plibersek. Clearly neither of the former ministers managed to define the role.

And despite Butler’s valiant efforts on this page, the term social inclusion remains little more than bureaucratic newspeak — a mere platitude devoid of substance.

It’s all about the importance of seeming to do something.

Other examples of this phenomenon include the government’s carer recognition legislation, legislation that spec-

ifically states that the act should not be seen as conferring new rights on carers.

To gain a better idea of what the social inclusion portfolio itself has achieved, it is instructive to look at what taxpayers’ dollars have actually been spent on.

The board has produced eight research reports, including Social Inclusion in Australia How Australia is Faring.

In other words, tens of thousands of taxpayers’ dollars were spend to discover that Australians are pretty happy, they enjoy catching up with family and friends, their family sometimes annoys them and some people are afraid after dark.

The Coalition does not have a social inclusion portfolio. And for good reason. If social inclusion means supporting the marginalised and helping those who face particular challenges, often for reasons beyond their control, then surely that is part of the core business of most ministerial portfolios.

The ministers for ageing, disabilities and carers, indigenous affairs, immigration, health, education, employment, human services and housing are all ministers for social inclusion.

There is, however, perhaps one minister whose responsibility for social inclusion is greater than that of any other. This particular minister presides over a department with the mission statement “to improve the wellbeing of the Australian people”. Which department might that be? Health? Human Services? Guess again.

The department in question is the Treasury. The minister most responsible for real social inclusion is, in fact, the Treasurer.

Firstly, delivering a strong and growing economy means jobs. A job is the single most important thing that can be done for an individual and their social inclusion.

Secondly, a government that lives within its means that has no debt and runs surpluses is in the best position to target systemic disadvantage. You can’t have a good social policy without a good economic policy.

No government has an endless pot of money. Funds wasted in one area inevitably lead to another area missing out. A case in point: the Gillard government’s annual interest bill on its debt is about $6.5 billion. This is equivalent to the annual unmet need of Australians with disability as quantified by the Productivity Commission.

The ALP loves symbols and gestures. Both can be important. But neither is a substitute for doing and achieving. There are two practical things Mark Butler can do as Minister for Social Inclusion.

Firstly, tell Wayne Swan to stop squandering opportunities to address real disadvantage by ticking off on wasteful spending such as pink batts, school halls and the NBN.

Secondly, tell the Prime Minister and Treasurer to appropriate real money in the next budget for a National Disability Insurance Scheme.

And I reckon I have a great idea as to where the first few million dollars for this worthy scheme can be found. Abolish the Social Inclusion Board and the whole social inclusion portfolio.

Senator Mitch Fifield is Coalition spokesman on disabilities, carers and the voluntary sector 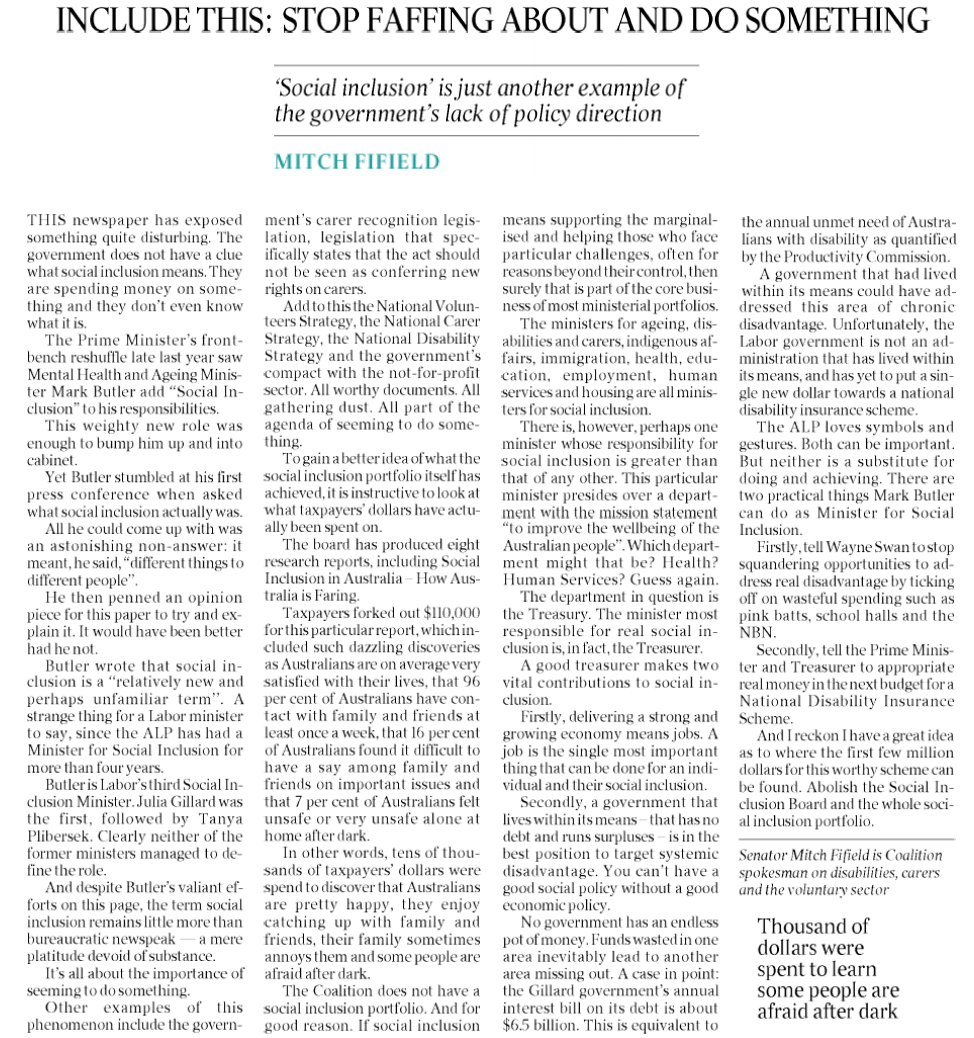