Idealism threatens jobs for the disabled

Idealism threatens jobs for the disabled

FEW would deny that the Australian Human Rights Commission is comprised of well-meaning advocates who have the best of intentions discharging their duties.

But good intentions can have a profoundly negative impact.

Take a recent decision by the AHRC, which denied an application made by the commonwealth for an exemption to the Disability Discrimination Act for certain Australian Disability Enterprises, formerly known as sheltered workshops.

Australian Disability Enterprises across the country employ more than 20,000 people with disabilities and determine workers’ wages using a number of wage ­assessment tools, which measure work output and calculate a wage accordingly.

One of these tools, the Business Services Wage Assessment Tool, was found by the Federal Court in 2012 to be discriminatory in relation to two ADE workers with intellectual disability.

The commonwealth, on behalf of ADEs, lodged a request with the AHRC for a three-year exemption for BSWAT from the Disability Discrimination Act.

Three years would have allowed time for ADEs using the BSWAT to find a different wage assessment tool and move their employees to it without compromising their business structures. The decision of the Human Rights Commission to grant only a one-year exemption is worrying and disappointing.

This is compounded by the fact there was very little consultation with the people who would be affected by the decision before it was handed down.

If ADEs are required to immediately move to a new wage assessment tool, which could double the cost of providing employment, it’s entirely possible many would become unviable and cease to exist.

As it is, many ADEs already struggle to break even. They are commercial enterprises but their key objective is to provide suitable employment for people with a significant disability.

Accusations that ADEs exploit people with disability are unfair.

It is a mistake to isolate the hourly rate of a supported employee as the only benefit they receive. People working in ADEs also will usually be on the Disability Support Pension, and are often in receipt of other commonwealth assistance. But what’s perhaps more important is that they are given the opportunity to experience the dignity of work and to socialise with peers.

Sadly, without ADEs, the alternative for many people with ­disability would be to just stay home. ADEs are not like the sheltered workshops of old.

They are run by passionate, committed people who want to give people with disability the best chance possible for a fulfilling life through employment.

This is not to say that ADEs are the only opportunity for people with disability.

The Coalition government is committed to finding ways to increase employment opportunities for people with disability in the open workforce. There is much to be done to shift attitudes and ensure we stop limiting people by placing low expectations on them.

There needs to be a continuum of employment options, but there will always be some people with disability who won’t be able to participate in the open workforce.

We must not deny these people the opportunity to work because of misplaced utopianism.

Of course I appreciate that the AHRC had the best of intentions in handing down this ruling.

But by favouring idealism over the imperative to find a real-world solution, we risk kicking a spectacular own goal when it comes to the advancement of people with disability.

Mitch Fifield is the Assistant Minister for Social Services and Manager of Government Business in the Senate. 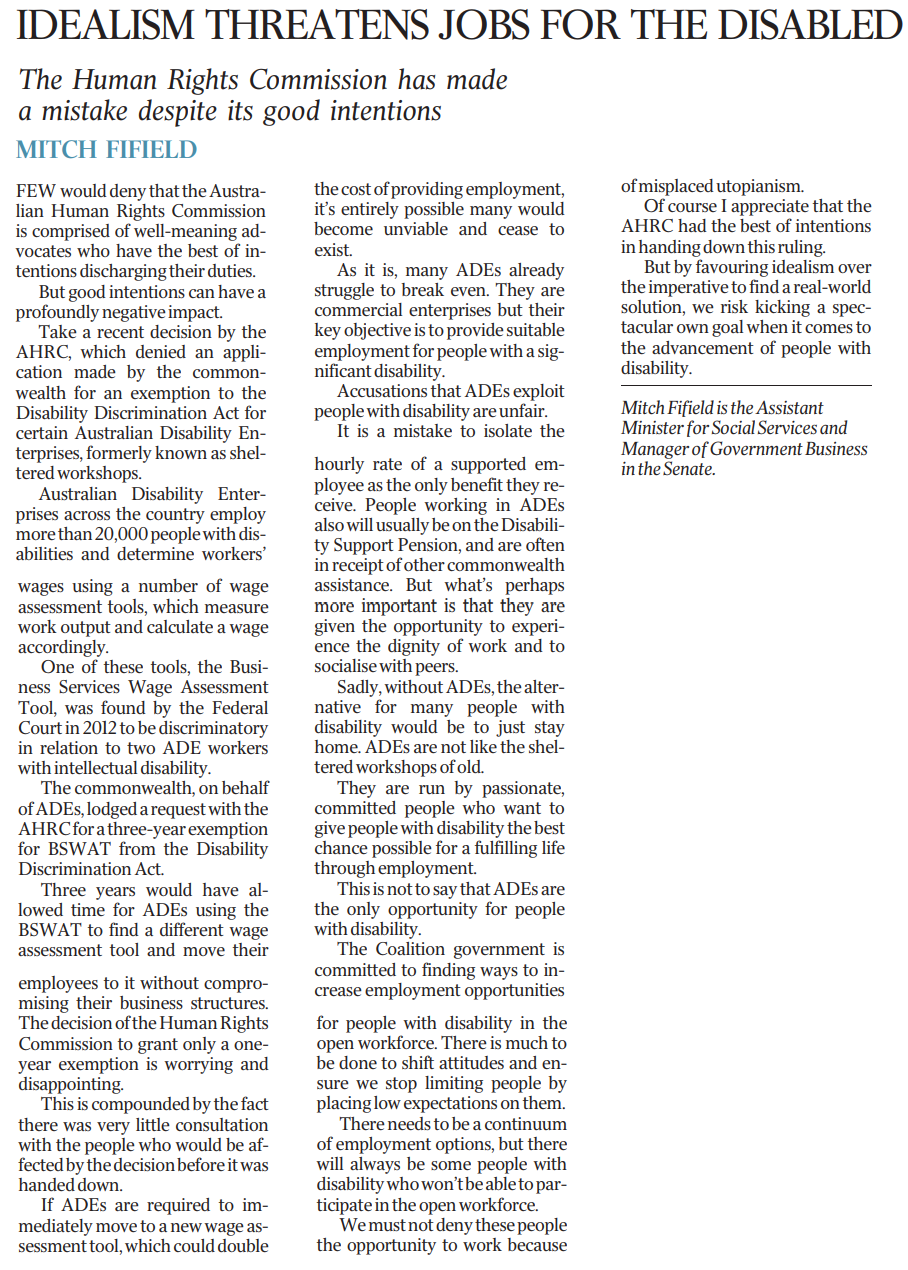