The disability scheme is needed, and the Coalition will ensure it is properly funded.

ONE of the great urban myths of public policy is Labor’s assertion that their half a per cent Medicare levy increase covers the full cost of the National Disability Insurance Scheme. It’s up there with that other hardy perennial — that the rest of the Medicare levy comes even halfway close to covering the commonwealth’s health expenditure.

The NDIS is needed. It has cross-party support. It is rolling out in trial sites and this government is absolutely committed to its completion. But as my portfolio colleague Scott Morrison has said, “the NDIS can’t just fall from the sky”. It has to be paid for.

The NDIS is the core business of government — support for people who face extra challenges for reasons beyond their control.

It is a massive venture. At full rollout, the NDIS will have a $22 billion annual budget in 2019-20. The gargantuan scale is a function of the decades of rationing and neglect that have been the hallmarks of the state-based arrangements the NDIS will ultimately replace. But the funds have to come from somewhere. and the funding sources are a complex mix that Labor continues to use to obscure the truth that, in government, they never worked out how to pay for the NDIS in full.

The states will essentially contribute into the NDIS pot the funds they currently spend on disability plus a bit more — all up around $10bn per annum. These funds will cover a little under half the scheme’s total costs. To complicate the maths, the commonwealth will assist the states with part of their costs by making some distributions to them from the Medicare levy.

But more than half the total scheme costs will be borne by the commonwealth which will contribute into the NDIS pot the money it currently spends on non-income disability supports — around $3bn per annum. In addition to this, the Commonwealth will also contribute around $9bn per annum of new investment into the NDIS. At full scheme, however, the annual proceeds of the Medicare levy increase earmarked for the commonwealth will only cover around 40 per cent of this new expenditure by the federal government.

The picture is even more stark when looking at the commonwealth’s total NDIS commitment — both new and old money — where the percentage of costs covered by the annual Medicare levy receipts falls to around 30 per cent.

Combining commonwealth and state NDIS expenditures, the percentage of total scheme costs covered by the levy each year falls to around 20 per cent. To say the Medicare levy increase will fully fund a completed NDIS into the future is simply untrue.

The effective funding gap — the difference between the annual NDIS Medicare levy proceeds and the additional commonwealth NDIS expenditure — is close to 60 per cent. Structural savings in other areas have to be identified to ensure the funds are there for the NDIS into its maturity. This is the hard work Labor pretended it had done, but which falls to the Coalition.

But there is some good news. The NDIS Medicare levy proceeds, at the insistence of the Coalition in opposition, are overseen by the Future Fund and its chairman Peter Costello. Safe from future Labor smash and grab raids, the Future Fund Guardians will ensure the levy proceeds can only be used for the NDIS.

The NDIS is too important for other than an honest appraisal. Those assessing it tend to be either “Pollyanna” or “Chicken Little”. Neither is correct.

The NDIS trial sites are progressing reasonably well. There are challenges. But the purpose of the trial sites was always to learn and to adjust. The truth is, a small and good start has been made but there are many issues still to be resolved and a long way to go. And Labor’s compressed schedule for start-up, to suit their election timetable, hasn’t helped the NDIS or its hardworking staff. But we will get there. We must.

Within the next six months we will have completed the negotiations with the states and territories to chart the path for nationwide rollout.

No one with a genuine commitment to the 460,000 Australians with a significant disability should want anything other than a clear-eyed assessment of what is required, fiscally and logistically, to deliver the NDIS. This is the approach the Coalition brings to the task. Labor should get on board, be honest about the budget, join in fiscal repair, and help the Coalition complete this great venture.

Mitch Fifield is the Assistant Social Services Minister with responsibility for the NDIS. 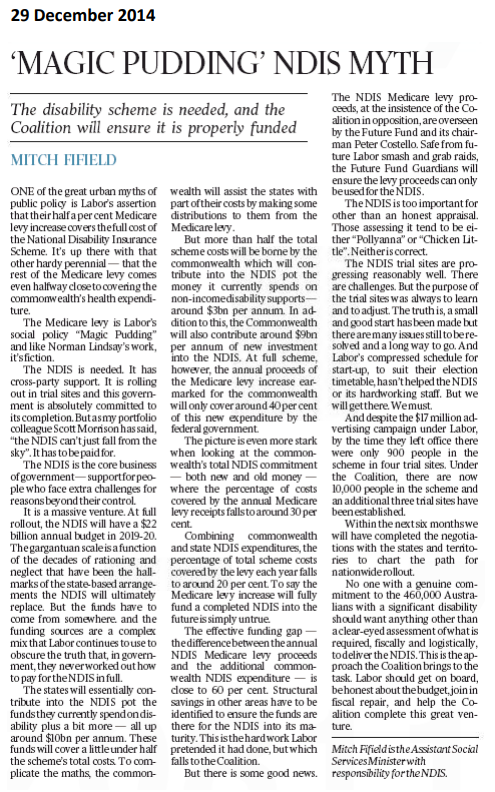