Broadband rollout on track and up to speed

Broadband rollout on track and up to speed

Tasmanians can thank the PM for rescuing the NBN, says Mitch Fifield

TODAY, more than half of all Tasmanian homes and businesses can connect to the national broadband network.

The project is on track and on budget because of Malcolm Turnbull’s turnaround of the company delivering the NBN.

Before he was Prime Minister, when responsible for the NBN, Mr Turnbull brought order where Labor had left chaos. A new board and a qualified chief executive were appointed, hiring new management and developing a better business plan.

This faster rollout brings real world benefits throughout Tasmania as people go about their daily lives, be it growing their business, studying for their next qualification or staying connected with family and friends.

We know from experience the turnaround of the NBN has not happened by chance. Many Tasmanians will recall that under Labor, the network’s local construction companies had downed tools and walked off the job. These businesses had made substantial investments in equipment and jobs, but walked from contracts due to Labor’s mismanagement.

This was the same mismanagement we saw with Labor’s handling of other major projects, like the home insulation scheme and its

failure to protect our borders. Under the Coalition, the rollout has hit every target we have set since coming into Government, unlike Labor, where the NBN missed every rollout target it was set.

Nationwide, more homes and businesses are connected each month than Labor managed in six years. Yes, one month versus six years.

During the recent election campaign, Labor’s promises revealed they were not ready to manage the NBN again.

A telling fact was that Labor strategists decided to release their NBN policy on a public holiday, when they hoped there would be less people paying attention.

Labor’s policy was to slow the rollout by two years, for completion in 2022. Labor was asking families, students and small businesses to wait up to six years to have access to high-speed broadband.

The NBN is important for education, but a child starting high school this year would be finished their final year exams before Labor’s NBN would be completed.

Under the Coalition, the NBN rollout is due to be complete in Tasmania by mid-2018, two years from now. Contracts have been signed for virtually every town.

Tasmanian businesses and households want and need to be hooked up to affordable, reliable broadband as soon as possible, and that is what the Coalition’s rollout delivers.

Labor’s election policy would have seen project costs rise by at least $8 billion. And who would pay for that? You guessed it, Australian households through their monthly internet bills. Labor’s last NBN policy would have added up to $43 to monthly broadband bills.

Labor stretched their credibility further by claiming that over the next four years it would not cost a cent to start installing a more expensive technology to an extra two million homes and businesses.

Across Australia, there are now more than a million paying customers on the NBN. That is up from just 51,000 customers nationwide when Labor left office.

Here in Tasmania, close to 170,000 homes and businesses can connect, and around 80,000 are doing just that, experiencing high-speed broadband sooner as a result of our faster rollout.

Better still, local construction companies and the jobs they have created have greater certainty under a project that is being managed properly.

When Labor mismanages projects like the NBN, it has real life impacts, making people wait longer and pay more for their broadband. Even worse, it hampers job creation and limits opportunity for people who want to work hard and build a better future.

Under the Turnbull Government, Tasmanians are benefiting from a faster broadband rollout that will see everyone connected by 2018 — not 2022.

Mitch Fifield is the federal Minister for Communications and the Arts. 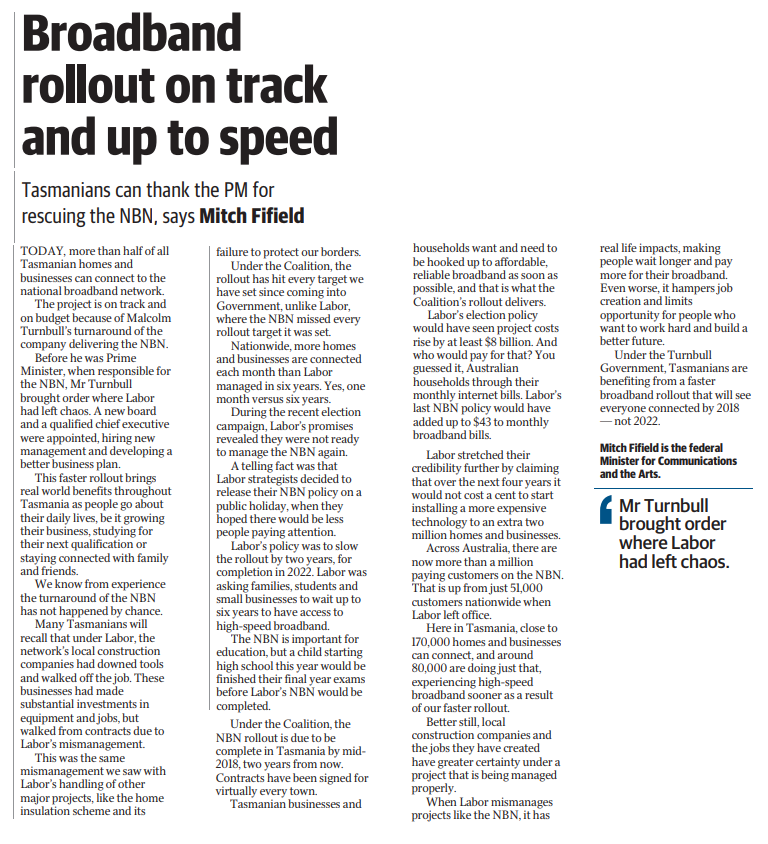