How Coalition delivered the goods on broadband

How Coalition delivered the goods on broadband

Today marks a major milestone in the NBN rollout.

The National Broadband Network has been a highly politicised project from day one. While both major parties recognise the importance of universal access to high-speed broadband, both sides remain bitterly divided over the best way to achieve this.

While this debate will doubtless continue for years to come, there is one point which is beyond contention: the Coalition is delivering the NBN in a way Labor never did, or ever could.

Today the National Broadband Network reached a significant milestone — the rollout passed the halfway mark. It is a remarkable achievement, considering the state of the project when the Coalition came into government less than four years ago.

The NBN is one of the greatest corporate turnaround stories of recent times.

In September 2013, the NBN was essentially a failed project. After two terms of Labor government and $6 billion in taxpayer funds, fewer than 3 per cent of Australian premises could access the network.

The NBN was connected to just 51,000 premises, and fewer than 300,000 premises were able to order a service. Contractors had downed tools in four states, and the NBN had missed every rollout target it had been set.

It was unrecognisable compared to the NBN today.

More than 2.4 million premises now have an active NBN service — more than 100,000 premises ahead of target.

Over the past 12 months, the NBN rollout has seen more than 11,000 premises become “ready for service” every working day. More than 5000 premises per day signed up to an active service.

The number of premises able to access the NBN doubled from 2.8 million to 5.7 million in one year.

By this time next year, the NBN will be available to three out of every four Australian homes and businesses, and will be complete by 2020.

So how did we take the NBN from failed project to more than half-complete in less than four years?

First, the government undertook a series of reviews, including a cost-benefit analysis that found the most significant benefit to Australia would be derived from deploying fast broadband as quickly as possible.

We put in place a top-class board that had the skills and experience needed to deliver the network on time and on budget.

And we moved from a government-mandated technology to a multi-technology mix, giving the project greater flexibility while still ensuring that all Australians would have access to a minimum wholesale broadband speed of 25 megabits per second, and at least 50 Mbps in 90 per cent of the fixed line footprint.

This allowed the rollout company, NBN, to deploy the most appropriate technology to each area of Australia, rather than mandating a “one size fits all” technology approach.

This stands in stark contrast to Labor’s plan, which would have resulted in typical broadband bills increasing by up to $43 per month, costing an additional $30bn of taxpayers’ money, and taking between six and eight years longer to complete.

It was the Coalition’s strategic, technology-agnostic approach that allowed us to completely turn the project around in just a few years.

And today, as the rollout passes the halfway mark, the results speak for themselves.

This is not a “set and forget” network, however, and more work continues to be done.

As NBN continues to beat rollout and financial targets, it is also deploying new technologies as they become available. This is only possible because of the technology-agnostic approach of the government.

Last month trials for construction of new fibre to the kerb technology commenced. There’s the new fixed wireless offering which will increase download speeds to 100 Mbps from early 2018. And only last fortnight, my colleague Fiona Nash and I announced a 50 per cent increase in peak downloads over the Sky Muster satellites.

We are also working with industry to improve the consumer experience, as the network is completed. The NBN’s migration processes continue to be refined, and it is working towards all network connections being “right first time”.

The government is putting in place the broadband performance monitoring and reporting program to provide better information to consumers. This program is already being implemented by the ACCC and will source data from about 4000 volunteers across the country. The program will provide information that is much more useful to consumers than confusing statements about theoretical maximum speeds or wholesale speed tiers.

From the NBN’s shambolic beginnings, the Coalition has turned the project around and the rollout is on track to be completed by 2020. It is a significant feat and I congratulate NBN Co for reaching this milestone. 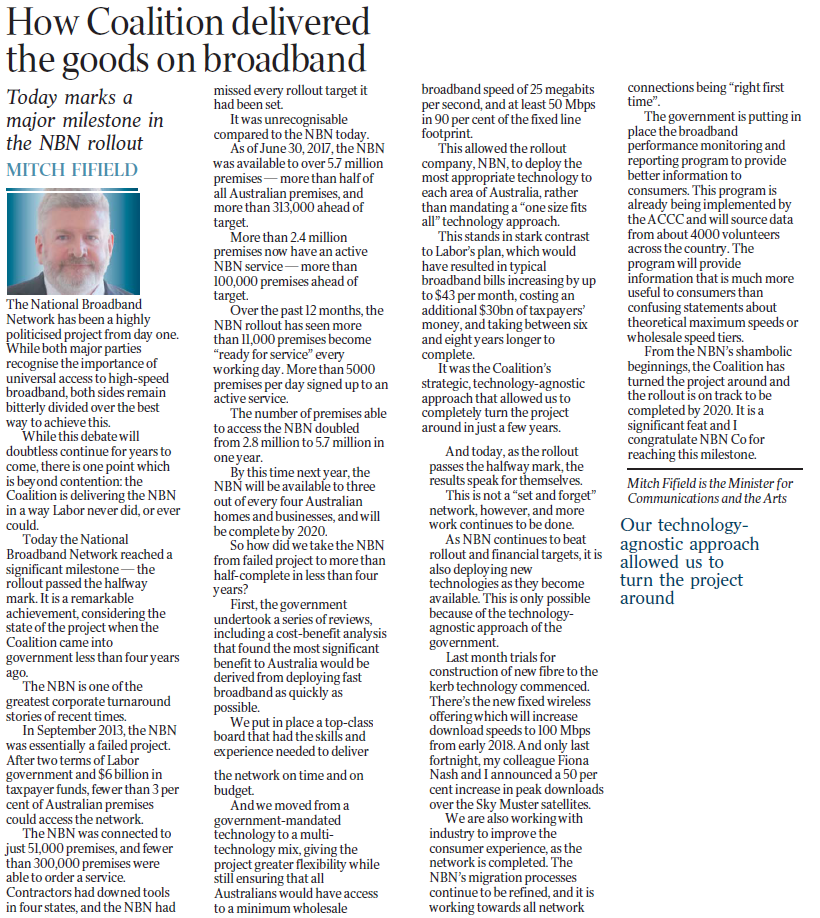