Affordable broadband is the go

Affordable broadband is the go

For most Australians, price is much more important than speed when it comes to choosing an internet plan.

When Australians are given the choice between the fastest broadband speeds available or more affordable broadband that meets their needs, what are they choosing?

Overwhelmingly, they are voting with their wallets and choosing more affordable internet plans that deliver the services they are after.

But if you listen to Labor’s hyperbole on the NBN, you could be mistaken for thinking that Australians are being left wanting for faster broadband speeds – when the evidence clearly shows that when such speeds are available, the vast majority of Australians are not prepared to pay for them.

One reason Australians are not purchasing 100-megabit-per-second plans is that for most families, there is not much of a practical difference between 25Mbps and 100Mbps to deliver the features they want.

Analysis by NBN shows that entertainment services like Netflix account for the largest proportion of the network’s usage.

Netflix recommends having a broadband connection of just 5Mbps to stream high definition video content, or 25Mbps if you are fortunate enough to have an ultra-high definition 4K TV.

For a family watching high-definition Netflix on one or two TVs while the kids are online at the same time, 25Mbps appears to offer the right amount of bandwidth at an affordable price point.

It costs more to deliver the highest speeds to everyone, and somebody has to pay for that.

The bill is either handed to the taxpayer – which means that all Australians are forced to pay more for speeds they may not want – or consumers, who pay for the speeds they desire through their monthly internet bill.

Australians households have shown a preference for affordable broadband that meets their needs.

There is more than enough capacity available on the NBN to give everyone a fast service.

The fibre-to-the-node network is capable of providing speeds much faster than what the majority of consumers are purchasing.

Two-thirds of premises connected to the FTTN network are able to receive broadband speeds above 50Mbps.

The government’s NBN policy will ensure that 90 per cent of premises in the fixed-line footprint are able to receive broadband speeds above 50Mbps – a target which NBN will meet with the multi-technology mix rollout.

The final point is that there is no evidence that investing more money into the NBN to provide higher speeds will translate into consumers paying to access higher speeds.

Given the choice, Australians have shown that 100Mbps speeds are not as important to them as keeping monthly internet bills affordable, when the services they are using typically don’t require those speeds.

In areas where 100Mbps speeds are available on the NBN, fewer than one out of every five customers are choosing to pay for it.

What are they buying instead?

More than 80 per cent of customers are purchasing speeds of just 12Mbps or 25Mbps.

The inconvenient truth behind the National Broadband Network is that it must be paid for.

Under Labor’s more expensive NBN rollout, consumer broadband bills would have been required to increase by $43 a month – more than $500 a year.

The fact is, Labor does not understand the distinction between price and speed, and they simply do not care. Under Labor, Australians would all pay more for broadband, either through higher internet bills or through higher taxes.

By rolling out the NBN more quickly and at less cost, Australian families pay less for their internet – and this is the government’s objective: to deliver universal high speed broadband as soon as possible at the lowest possible cost. 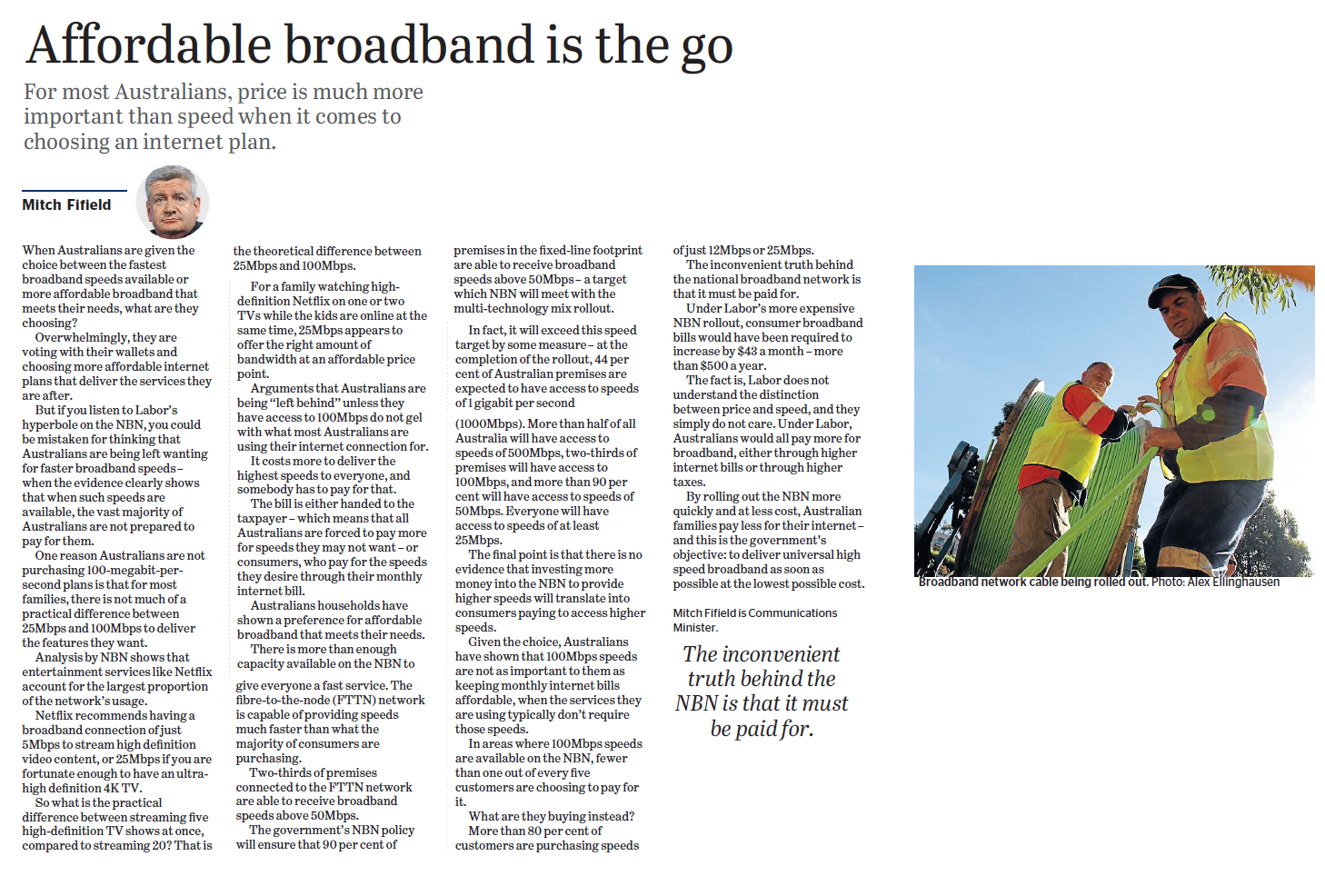