Shrill attacks on the ABC adjustments are hysterical, unhinged

Timely housekeeping at the broadcaster should be welcomed as essential

The reaction to the government’s enhanced transparency and accountability measures for our public broadcasters has ranged from the hysterical to the slightly unhinged.

Labor’s Michelle Rowland called them a “direct assault on the independence of our public broadcasters”. Paul Barry of the ABC’s Media Watch frothed that the government was “bashing” Aunty. And Michael Pascoe wrote that it was all a plan to “whip, embarrass and damage the ABC”.

With so much journalistic and opposition hyperventilating, you could be forgiven for thinking the government had announced the privatisation of B1 and B2, or appointed one of the many persistent arch-conservative critics to the ABC board. Not that there would be anything wrong with that. Different, diverse voices make public broadcasters strong-er, not weaker. So what is this radical government agenda that will destroy the ABC as we know it?

First, the ABC charter contains no reference to an obligation to serve rural and regional Australia, so the government wants to fix this by specifically referring to rural and regional Australia in the charter. This was the sensible idea of my Coalition colleague Bridget McKenzie, who drafted a private senator’s bill to address this and other omissions that the government has adopted.

It is difficult to imagine that anybody would object to this, yet they have. Why is beyond comprehension.

What prompted McKenzie’s actions were two ABC decisions affecting rural and regional audiences that were taken without adequate consultation: changes to radio programming; and the cessation of short-wave broadcasting to the Northern Territory and the Pacific region.

This change is aimed at rein-forcing the ABC’s focus on the needs of audiences beyond the city. It’s important because regional Australians rely more on the ABC than do their metropolitan cousins.

I respect the ABC’s managing director, Michelle Guthrie, but her assertion that formalising its rural and regional obligations represents “more bureaucracy” the organisation “doesn’t need” must be challenged.

The final decision on these matters will be made by parliament. That is as it should be.

The government will also require the ABC and SBS to disclose the salaries of its highest paid staff. Our inspiration for this is the actions of that right-wing haven the BBC. In Australia the salaries paid to ministers, MPs, judges, military officers and senior civil servants are all public. It is in keeping with the temper of the times to expect similar transparency from the national broadcasters.

Then there is the proposal to add the words “fair” and “balanced” to the ABC Act alongside the existing requirement for news to be “accurate” and “impartial”. Again, it is difficult to imagine anyone complaining about this, yet they have. Some have wrongly and mischievously suggested that “fair” and “balanced” means giving equal time and weight to fringe views. Labor even made the base suggestion that it could mean equal time for Holocaust deniers.

Reasonable people understand the ordinary meaning of “fair” and “balanced”. In fact, chapter four of the ABC’s own editorial policies requires “a balance that follows the weight of evidence” and mandates “fair treatment”. The Media Entertainment and Arts Alliance’s journalistic code of ethics also mentions fairness no fewer than six times.

Finally, there is the competitive neutrality inquiry. This will examine whether the ABC and SBS are adhering to their charters and whether they use their status as taxpayer-funded government entities to unfairly compete with commercial media. The national broadcasters are important institutions that hold privileged positions. Together they receive more than $1.3 billion in taxpayer funds each year. Fancy a government wanting to ensure taxpayer dollars are well spent. It is right to periodically examine whether expenditure aligns with charter responsibilities.

These changes are taking place in a broader context. The government has enacted historic reforms to bring media laws into the digital age and unshackle Australian companies from restrictive and

redundant regulation. They will bolster media diversity by making Australian media voices stronger. It would reflect better on the

ABC, secure in its more than $1bn of annual funding, if it showed a greater understanding of the challenges faced by its commercial counterparts who earn their revenue rather than receive it from the Treasury.

And rather than be pilloried, crossbench colleagues deserve credit for engaging constructively with the government on media reform, listening to the arguments and negotiating in good faith.

The public broadcasting reforms are timely housekeeping to ensure the ABC and SBS continue to perform their important roles in a way that honours and serves the Australian taxpayer.

Mitch Fifield is the federal Minister for Communications. 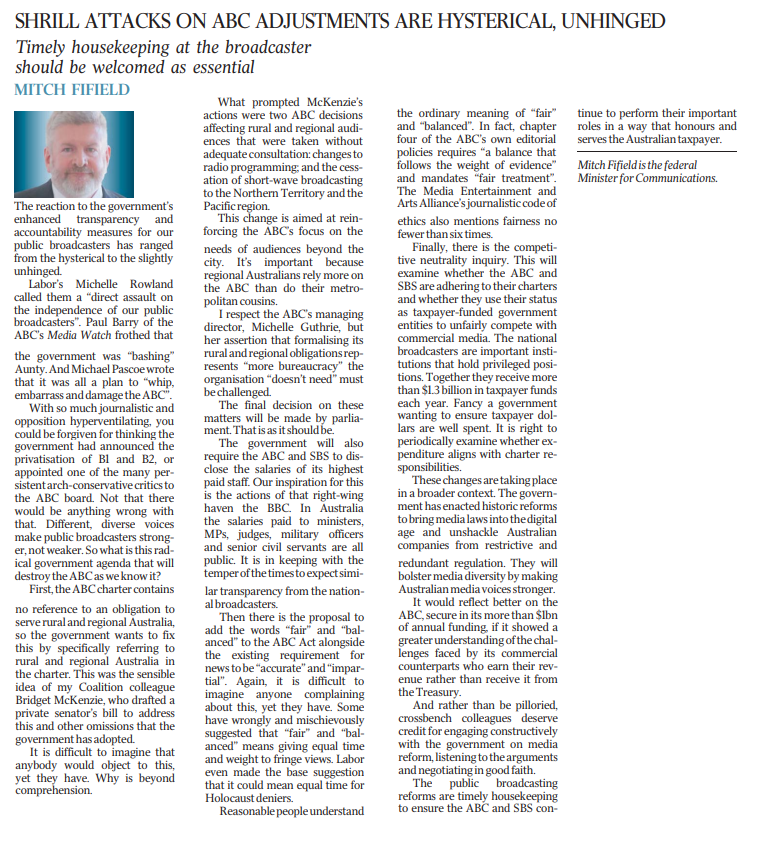