Kenya believe it? Why NBN critics aren’t connected to reality

Kenya believe it? Why NBN aren’t connected to reality

Clickbait headlines like “NBN slower than Kenya, ex-Soviet bloc” might be eye-grabbing, but they’re completely disconnected from reality.

In a case of “lies, damned lies, and statistics”, the article published in The Australian Financial Review (October 5) repeats a number of misleading claims about Australian broadband speeds – including the howler that Australia’s internet is slower than Kenya’s.

The facts tell a very different story. Kenya has a broadband penetration rate below 2 per cent – meaning that 98 per cent of people living in Kenya have no access to a fixed broadband connection.

Contrast this with the National Broadband Network rollout in Australia, which will connect 100 per cent of Australian premises by 2020. Today, the NBN already passes 6.4 million Australian premises and close to 3 million premises already have an active connection – compared to fewer than 200,000 premises in Kenya that can access broadband at all.

The National Broadband Network rollout has the objective of making high-speed broadband available to 100 per cent of Australian premises.

The 98 per cent of Kenyans without any access to broadband at all would no doubt take issue with the fatuous claim that Kenya is somehow better off than Australia.

It’s a cute coincidence that Kenya has fewer than 200,000 premises with access to high speed broadband, because that’s how many premises in Australia had access to the NBN after two terms of Labor government and $6 billion sunk into the rollout of Labor’s slow, expensive fibre to the premises network.

After four years of the Coalition’s faster, more affordable NBN rollout, the NBN is now being made available to around 150,000 new premises every single month.

And it’s worth mentioning that the report which ranks Kenya’s sub-200,000 broadband users above Australia is mostly measuring non-NBN connections in Australia, given that the majority of Australian households are yet to transition to the NBN.

As more homes disconnect from old ADSL services and get on the faster NBN, expect Australia’s average internet speeds to climb.

The article claims that internet speeds make it “tougher for workers to move from major cities and ease pressure on house prices in Sydney and Melbourne”. This argument misses the point that the rollout of the NBN is more advanced in regional areas than major metropolitan areas, thanks to the Coalition’s decision to prioritise regional areas which had typically languished with poor connectivity.

The rollout in regional Australia is more than two-thirds complete, and the fixed wireless technology often used in regional outskirts offers broadband speeds of up to 50Mbps, soon to be 100Mbps – much faster than ADSL services available in cities.

The article goes on to claim that Australia’s internet speeds “makes it harder to boost productivity”. The reality is that the best way to improve productivity is to roll out the network faster – not to roll out a gold-plated all-fibre NBN.

The Coalition’s NBN is due to be complete by 2020, giving 100 per cent of Australians access to the productivity benefits of high-speed broadband at affordable prices.

Were Australia to revert back to an all-fibre rollout, parts of Australia would be waiting until 2026-28 to have access to high-speed broadband – in the meantime they would be expected to languish on pre-NBN technology – hardly providing a boost to productivity.

The article repeats another great furphy of the NBN debate – that nations around the world are rolling out fibre-to-the-premise networks. Nothing could be further from the truth.

Nations around the world are overwhelmingly rolling out a mix of technologies to deliver high-speed broadband in the most economically pragmatic fashion.

Fibre to the premises might make sense in city-states like Singapore and Hong Kong where almost the entire population lives in high-rises. But for the rest of the world a mix of technologies is enabling people to connect to high-speed broadband faster and at lower cost.

The Coalition’s NBN is one of the greatest corporate turnaround stories in recent memory. From a network that had just 51,000 active users in 2013 to almost 3 million users in 2017, the NBN doubled its footprint in the past year and will do so again in the coming year.

While Labor’s plan would have taken six to eight years longer and cost an additional $30 billion to complete, the Coalition’s NBN will stop household internet bills from rising by up to $43 per month. There’s not much point rolling out the world’s fastest broadband network if nobody can afford the monthly bills.

The Coalition is the only party that can be trusted to improve Australia’s internet speed ranking – by getting the NBN connected to as many Australians as quickly as possible.

Mitch Fifield is the Minister for Communications. 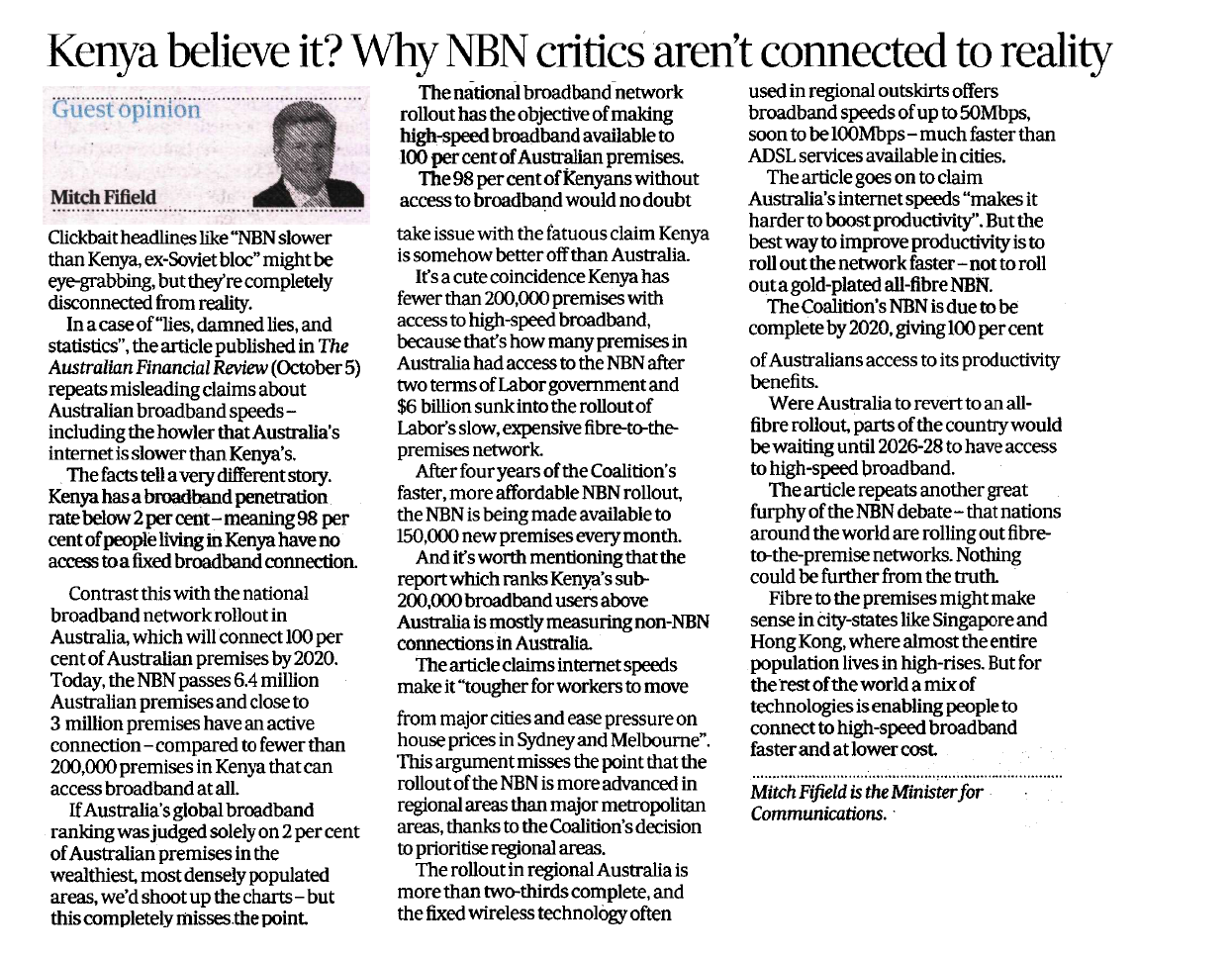