IF the road to hell is paved with good intentions, human rights bureaucrats have been laying down the bitumen. This could be the case in Victoria if Premier John Brumby accepts recommendations to fortify the powers of the Equal Opportunity and Human Rights Commission.

And they constitute a clear and present danger to some of our most fundamental democratic rights.

Gardner seeks to grant the commission powers of forced entry, search and seizure. He would apply Alice in Wonderland rules to a central pillar of our common-law justice system. Like the Queen of Hearts who cries “Off with their heads” and only then holds a trial, Gardner would reverse the onus of proof from accuser to accused. Anyone suspected of malfeasance by the Victorian Equal Opportunity and Human Rights Commission would be considered guilty until proven innocent.

Under Gardner’s reform scheme, the law need not be breached before the long arm of the commission comes into play. Similar to the Department of Pre-Crime in the Toni Cruise film Minority Report, investigators could conduct inquiries into any situation where a violation is about to occur.

Quite an Orwellian touch.

There is little comfort to be found in Gardner’s recommendation to devolve the power of enforcement to the Victorian Civil and Administrative Tribunal. After all, it was VCAT vice-president Michael Higgins who imposed a perpetual gag order on an evangelical Christian minister who made unflattering comments about Islam. Higgins forbade pastor Danny Nalliah “to make, publish or distribute in Victoria (including on the internet), whether in writing or orally and whether directly or indirectly, any statements and, or alternatively, information, suggestions and implications, to the same or similar effect as those found by the tribunal to have breached the Racial and Religious Tolerance Act”.

All this is frighteningly reminiscent of the situation in Canada, where official agencies of the state prosecute citizens for the thought-crime of political incorrectness. Canada’s federal and provincial human rights commissions were established to fight discrimination in housing and employment. But these quasi judicial bodies have metastasised into partisan star-chamber tribunals that selectively file charges against those who espouse conservative political or religious beliefs.

Clergyman Stephen Boissoin ran afoul of the Alberta Human Rights Commission when he composed a letter to the editor endorsing a traditional biblical view of homosexuality. The commission classified this declaration of customary Christian faith as an act of “hate propaganda” and slapped him with a $C5000 fine. Boissoin was also ordered to “cease publishing in newspapers, by email, on the radio, in public speeches or on the internet, in future, disparaging remarks about gays and homosexuals”.

This act of censorship was not the only instance in which the principles of Canadian democracy were sacrificed at the altar of the human rights bureaucracy. Magazine editor Ezra Levant was hauled before the Human Rights Commission for re-publishing the controversial Mohammed cartoons that had appeared in the Danish newspaper Jyllands-Posten. And noted columnist Mark Steyn was prosecuted for disparaging Islamic terrorists.

Freedom of conscience and expression is the most fundamental of all democratic rights. These liberties are the cornerstones of representative government because, in their absence, our parliamentary system would collapse.

But free speech takes on real meaning only when it is guaranteed to those whose views you despise.

While racism and sexism are ugly things, the suppression of democracy in an attempt to quash intolerance is much uglier and far more dangerous.

Political liberty in Victoria is threatened more by the heavy-handed censoriousness of the Racial and Religious Tolerance Act than by non-violent expressions of bigotry. Human rights apparatchiks who claim that the deranged ranting of a few neo-Nazis will spawn a new Kristallnacht are social pessimists who have little faith in Australian democracy. The last thing we need is expanded powers for the Equal Opportunity and Human Rights Commission that could create a thought police squad on steroids.

Australians are not permitted to vote until the age of 18 because political participation is deemed to require a certain level of maturity. And maturity, in turn, must involve the ability to withstand the slings and arrows of verbal insult. Anyone who doubts the centrality of robust expression to Westminster democracy should attend a few sessions of parliamentary question time.

No open society can long endure a so-called right to be protected from umbrage because the cost in relinquished liberties is far too high. Any attempts to shield our tender sensibilities through government censorship only undermines freedom and infantilises us all.

Rather than give real teeth to the Victorian Equal Opportunity and Human Rights Commission, this Praetorian Guard of political correctness should be restricted to legal dentures.

Mitch Fifield is a Liberal senator from Victoria. 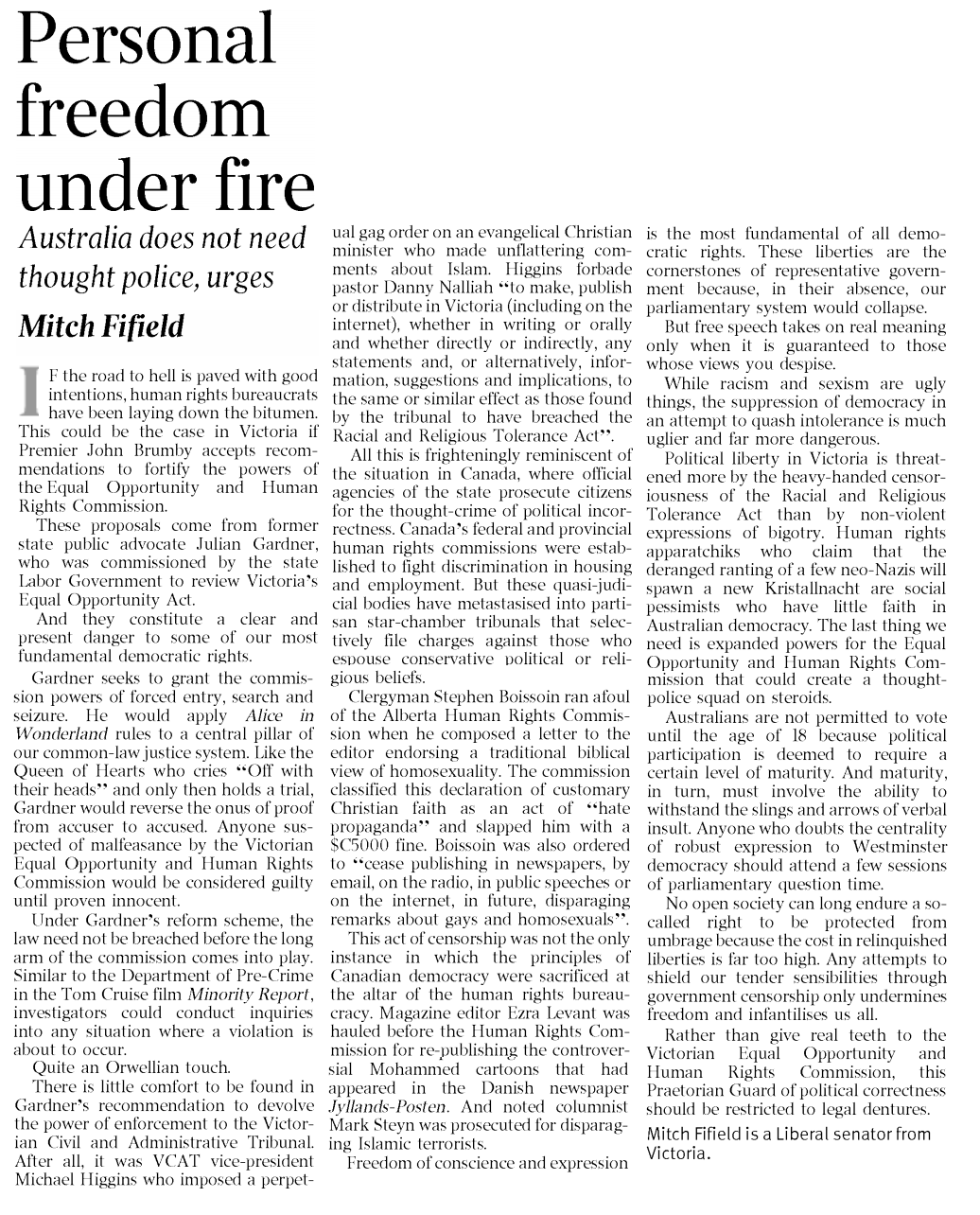